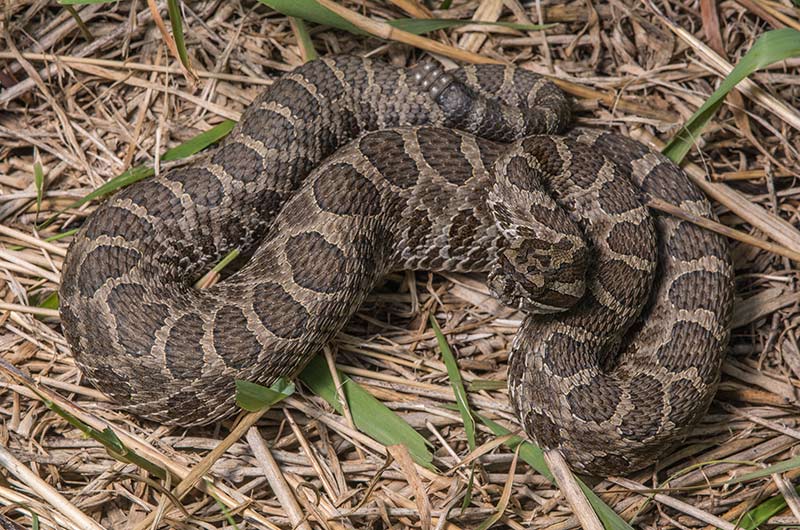 Communal denning throughout the winter season is a common occurrence for western massasauga. The den is called a hibernaculum.

The western massasauga rattlesnake is a medium sized, <25 in/65 cm, pit viper with light-brown base color and a row of dark brown blotches, that are wider than they are long. Massasauga have a distinctive dark brown eye stripe that extends back from each eye to the corners of the mouth. Females are generally shorter in length than males. When disturbed, massasauga sound a warning by rattling their tail. There are two subspecies of western massasauga rattlesnake. The desert massasauga is commonly associated with xeric prairie habitat from western Texas to southeastern Arizona, with isolated populations in Colorado and Mexico. Prairie massasauga prefer mesic grasslands and are often associated with wetlands. They have a patchy distribution from Texas, Arizona, south-east Colorado, central Oklahoma and eastern Kansas. 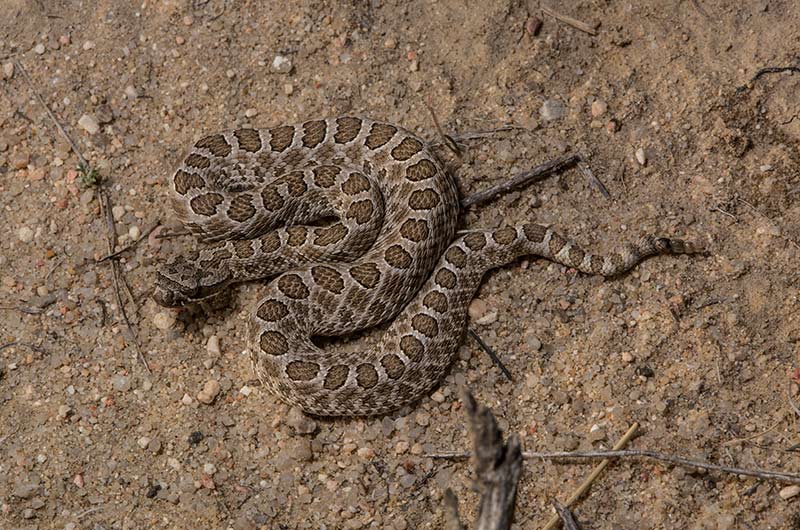 Both sub-species migrate to hibernation sites in October/November and emerge in mid-April to return to summer foraging and gestation areas. In the spring, snakes move up to 1.3 mi/2 km from the hibernaculum (over wintering dens) in shortgrass prairie areas with compact clay soils to summer foraging areas in mixed grass, sand sage or sand hills prairie. In the summer, snakes are often observed at the base of sand sage in ambush or resting coils.

Communal denning throughout the winter season is a common occurrence for western massasauga. The den is called a hibernaculum.

Prairie massasauga prefer more mesic grasslands, including tallgrass prairie with nearby wetlands or drainages. They tend to occur in areas of dense grass or forb cover and moderate amounts of leaf litter during the summer and fall. Lowland prairie habitats containing loose, loamy soils with many small mammal burrows and sparse vegetation in winter. Often uses crayfish burrows to hibernate. 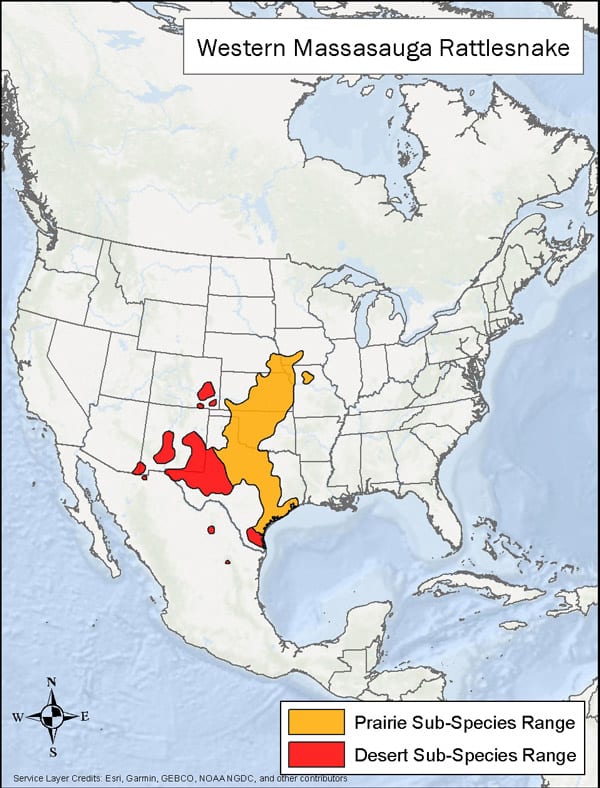 Range map provided by the International Union for Conservation of Nature

Maintain or create a diversity of vegetation structures through grazing management. Grazing management or prescribed burning that produces a patchy mosaic of basking areas, cover and foraging sites is ideal. In addition, prescribed fire can reduce woody vegetation encroachment. Burning should be done prior to spring emergence (before April) when possible. Leaving patches of un-mowed grassland that shift location annually can help to maintain proper refugia, corridors, and foraging opportunities for massasauga while reducing the chance of predators learning to hunt along specific mowed paths. Careful planning for urban and infrastructure development to avoid critical areas for hibernation and heavy vehicle/machinery use during months of migration to avoid road mortality.

Western massasauga are long-lived and slow to reproduce, therefore they are inherently vulnerable to any population losses. Actions that result in habitat loss or degradation and direct killing should be avoided. Tillage should be avoided as it can result in direct mortality, impenetrable barriers to movement, reduced prey availability and increased vulnerability to predation. Prairie western massasauga are vulnerable to water table drawdown from diversion and well water use, reducing the quantity and quality of mesic habitat available for hibernating and foraging.