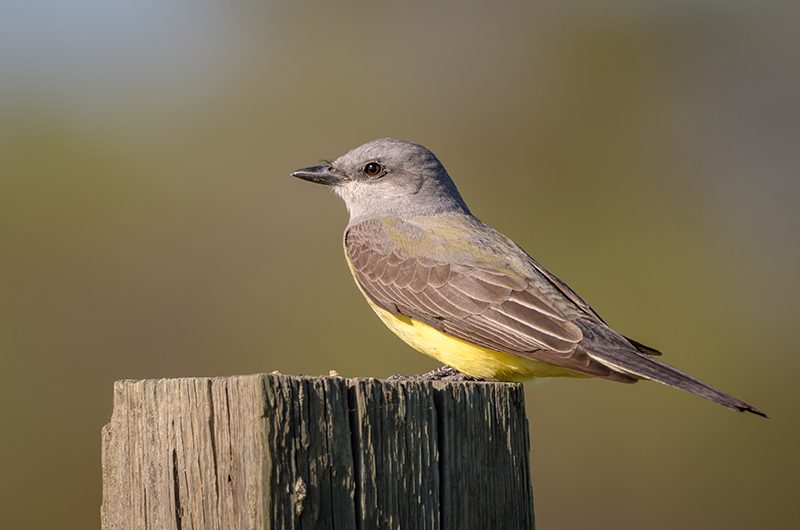 The western kingbird’s breeding range has expanded eastward since the late 1800s because human activity has provided habitat. The planting of trees and installation of utility poles in the prairie provides places for the birds to perch and hunt insects and also nest. In areas where forests have been cleared, the birds have more open habitats suitable for foraging for insects. Although known as the “western” kingbird, this species also often wanders to the East Coast during fall migration.

Western kingbirds are 8-9 in/20-24 cm long flycatchers. Males and females look similar: a pale gray head and breast with a darker gray eye mask, brownish-black wings, and a bright yellow belly. Their black tails have white on the outer edges and help to distinguish them from similar-looking kingbirds (Cassin’s, Tropical, and Couch’s).

In the spring and summer, breeding males are difficult to miss in open habitats throughout western North America: they perch on tree limbs, fences, or wires, often along roads, and give a rising series of sharp “kip” notes, followed by a series of squeaky, descending notes. The birds are conspicuous as they fly out to catch insects from their perch and scold and chase other birds, including much-larger raptors. Western kingbirds tend to migrate individually or in small groups and spend winter in southern Mexico and Central America.

The western kingbird’s breeding range has expanded eastward since the late 1800s because human activity has provided habitat. The planting of trees and installation of utility poles in the prairie provides places for the birds to perch and hunt insects and also nest. In areas where forests have been cleared, the birds have more open habitats suitable for foraging for insects. Although known as the “western” kingbird, this species also often wanders to the East Coast during fall migration.

Western kingbirds breed in open areas across western North America, including grasslands, desert shrublands, pastures, croplands, and urban areas. They are often found near woodland edges because they use trees and shrubs for nesting and perching. Open areas used for breeding are often adjacent to woodlands or shrublands composed of Fremont cottonwood, Arizona sycamore, oaks, junipers, creosote bush, mesquite, plains cottonwood, sagebrush, and ponderosa pine. Western kingbirds build their nests in a variety of trees and shrubs, such as cottonwood, Texas mulberry, pecan, elm, willow, mesquite, creosote, yucca, sycamore, box elder, western juniper, big sagebrush, and green ash. Nest placement is usually on a horizontal branch or in a crotch within the canopy of the tree or shrub, and usually within the upper one-third of the tree or shrub. The average minimum height of a tree or shrub used for nesting is 5.5 yd/5 m. They will also nest in human-made structures, such as utility poles. 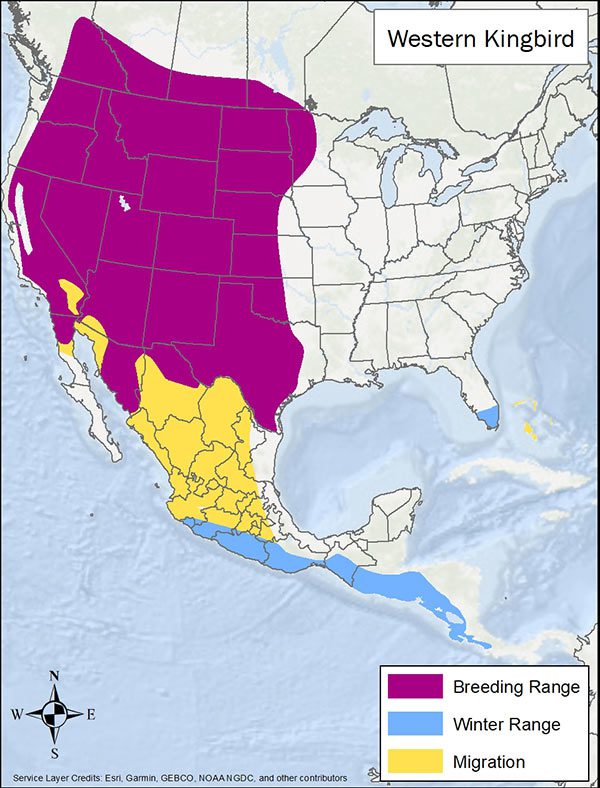 Because western kingbird populations are believed to be stable or increasing throughout their range, there are few, if any, specific management recommendations for this species. However, they will benefit from the protection or restoration of riparian habitats that provide nesting and foraging opportunities. Shelterbelts in open areas also provide places for western kingbirds to nest.

Because western kingbirds often nest near croplands, avoid pesticide exposure which can harm adults and nestlings and reduce insect food sources. Otherwise, western kingbirds generally benefit from human activity that may be harmful to other species, such as clearing trees and installing utility poles and other structures.

Other species that may benefit from habitat management for western kingbirds include eastern kingbirds, scissor-tailed flycatchers, western meadowlarks, and barn swallows.

BirdLife International and Handbook of the Birds of the World. 2019. Bird species distribution maps of the world. Version 2019.1. Western Kingbird

The Cornell Lab of Ornithology, Birds of the World Western Kingbird

The Cornell Lab of Ornithology. All About Birds Western Kingbird