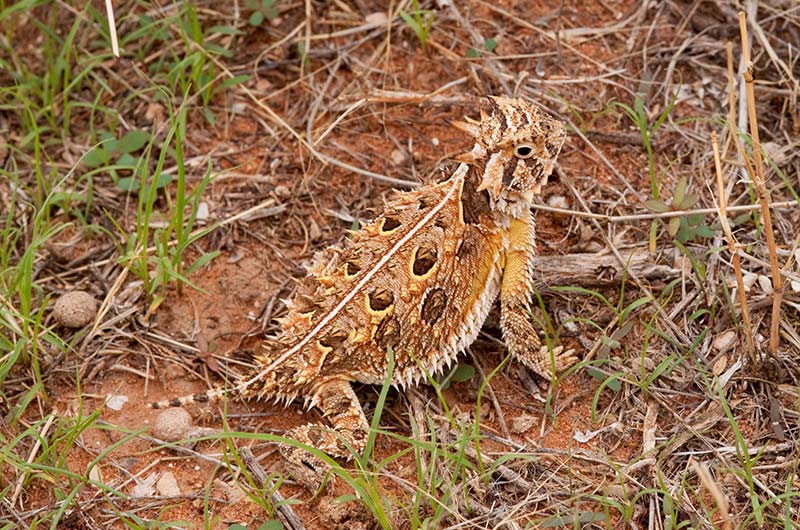 Texas horned lizards feed primarily on harvester ants, 69% of their diet. They wait motionless along harvester ant trails and capture ants as they pass by flicking out their tongue and swallowing whole.

Being naturally camouflaged and tending to freeze as a defense mechanism, Texas horned lizards are hard to find. They spend winter underground. When inactive, Texas horned lizards burrow into the ground, use rodent burrows or hide under rocks. During spring and early summer, they can be observed in their habitat by slowly driving paved and unpaved roads in early to late morning. The lizards frequently bask in the sun on roads.

Texas horned lizards feed primarily on harvester ants, 69% of their diet. They wait motionless along harvester ant trails and capture ants as they pass by flicking out their tongue and swallowing whole. Horned lizards also have an unusual defense – they squirt blood from their eyes when threatened especially by cats and canids (dogs, foxes and coyotes).

Texas horned lizard live in arid and semiarid areas with open deserts and grasslands, including playa edges, bajadas (alluvial fans), and sand dunes. Areas with 50-80% grass and shrub cover, including yucca and mesquite, provide adequate protection from predators and shade during the heat of the day. Large patches of bare ground, 20-40%, and <20% forbs are ideal for basking and allowing easy movement through the vegetation. Sand and loam soils are preferred with surface cobbles and stones. Texas horned lizards can also be found of black-tailed prairie dog towns. At night, horned lizards bury themselves in soil or take refuge in rodent burrows or similar shelters. 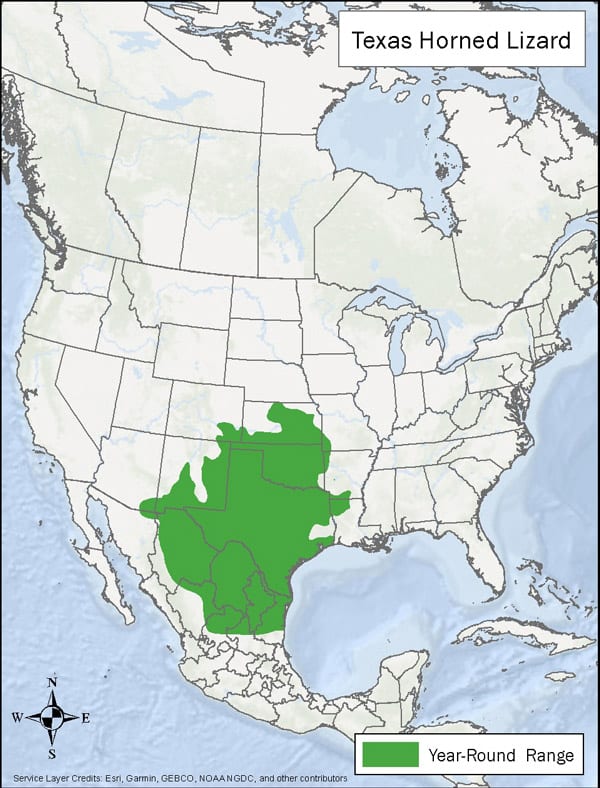 Maintain and manage for grasslands that contain a diversity of native plant species and a mosaic of habitats with open areas intermixed with more dense cover. Manage fire ant populations where possible. Control feral dogs and cats as horned lizards are an easy meal with no effective defense mechanism. To reduce mortality from vehicles or machinery, new roads should be carefully sited, and care taken when driving roads in morning hours when horned lizards are basking on the road and foraging.