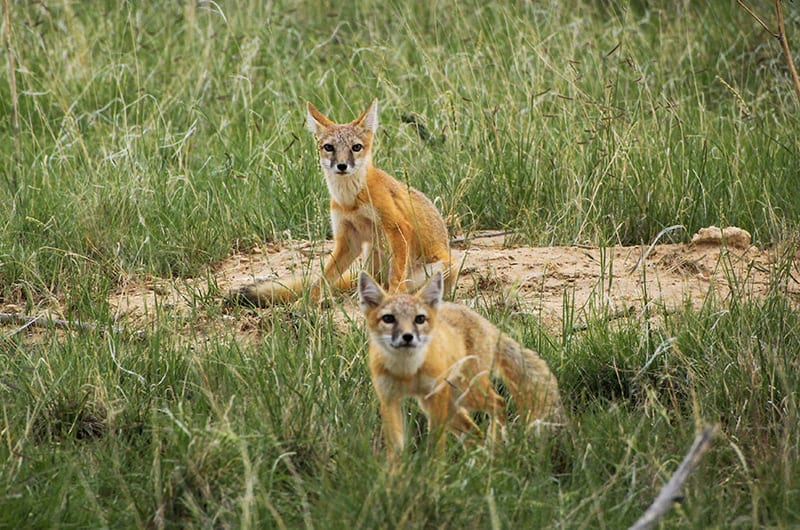 © Tegan May, courtesy of The Nature Conservancy

The swift fox is the smallest canid in the United States and gets its name because it can reach speeds of 25 mi/40 km per hour.

Swift fox are small canids, about the size of a house cat, weighing 4-7 lb/1.8-3 kg. Winter fur is dark buffy-gray above, orange-tan on the sides, legs, with a black-tipped tail, and white on the chest and belly. In summer, the coat is shorter, and more reddish. Males are slightly larger than females. Dens are built on sloping plains, hilltops, or other well-drained sites in short-grass and mixed-grass prairie.  Swift fox will also den in dryland wheat fields or roadside culverts/banks. Swift foxes tend to avoid areas of dense shrubs and tall vegetation. Historical range included the central plains of North America, from southern Alberta and Saskatchewan south to northern Texas. Extirpated from Canada in the late 1930’s. Swift fox have been reintroduced in Canada and Montana.

Primarily nocturnal, may rest in sun outside den during the day. In the winter, foxes may sun during the day. In summer, late morning and early evening are the only daylight hours spent above ground. They usually emerge from their dens shortly after sunset for hunting.

The swift fox is the smallest canid in the United States and gets its name because it can reach speeds of 25 mi/40 km per hour.

Swift fox favor open short-grass and mid-grass prairie and arid plain habitat, with flat or gently rolling hills, <15% slope. They will also utilize a mixture of non-native and native habitat in portions of their range, including agricultural croplands such as winter-wheat fields. Swift fox select habitat with long sightlines, therefore avoiding tall vegetation and canyons, steep hills, dense shrubs and forests. Grasslands with less than 5% shrub cover with vegetation height less than 10 in/25.5cm is ideal as it provides adequate visibility as well as providing cover for swift fox prey species such a birds, rabbits and small rodents. Shrubs species include sagebrush, greasewood and saltbush.

Swift fox may dig a burrow or enlarge a burrow made by another mammal (e.g., prairie dog, ground squirrel, badger), usually in well-drained, loamy soils. These dens are for protection from extreme weather conditions, escape cover from predators, and as shelter for rearing young. An individual may use several different dens throughout the year. A family group often has a number of clustered den sites, with a maximum span of 550 yd /503 m between. The number of available dens is likely to increase survival. Prairie dog colonies are high quality habitats for swift fox, as they have a high density of prey and available burrows. Predation by coyotes is the leading cause of mortality for swift fox, so visibility and den sites are critical for their survival. Swift fox are opportunistic foragers and adapt their diet to what is available. They feed on a variety of mammals, birds, insects, plants and carrion. Swift fox can survive without freestanding water. 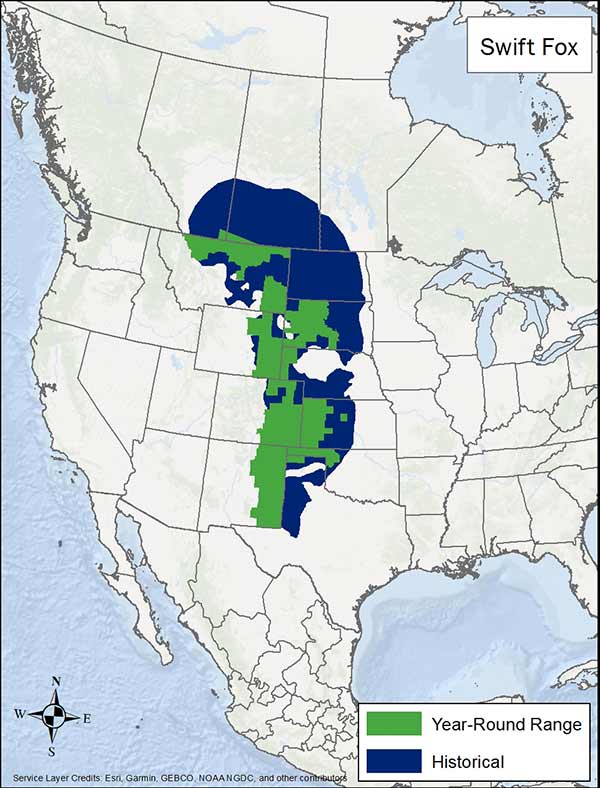 Restoration of degraded prairie or cropland back to native short-grass/mid-grass perennial species is beneficial for the swift fox. The NRCS Conservation Reserve Program (CRP) is available to incentivize restoration of marginal cropland. Providing large, intact prairie blocks of at least 518- 931 ha/ 1,280 – 2,300 ac has been found to provide adequate prey base, when within close proximity to den sites.

Rotational and other managed grazing strategies that establishes and/or maintains a mosaic of grassland habitats benefits swift fox and many other short-grass prairie wildlife. In additional, spring or fall prescribed fire to control expanding brush and invasive species is beneficial for swift fox. If managing coyote populations, red fox may move into areas vacated and out compete swift foxes. Coyote control should be done in conjunction with swift fox escape habitat restoration and enhancement.

Avoid loss and fragmentation of swift fox habitat from development, conversion to row crop, mineral extraction and new roads where possible. Avoid season-long grazing and overstocking as it can diminish habitat quality and reduce the number of swift fox prey species, resulting in foxes foraging further away from the safety of their den. Avoid management activities aimed at eliminating prairie dog colonies, rather allow prairie dogs to maintain occupancy in acceptable areas with high quality habitat. Swift foxes often use the roads to travel resulting in high road mortality. Keep a careful watch for swift fox when traveling during known active times to avoid collisions.