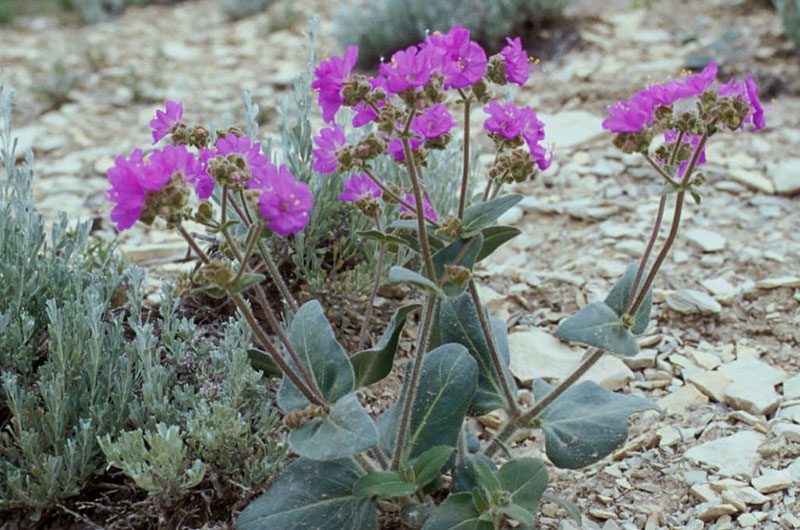 The flowers of this four o’clock open before dawn and remain open until mid-morning, just a few hours.

Round-leaf four o’clock is a flowering perennial plant, 8-12 in/20-30 cm tall. The plant can be either erect to spreading along the ground. The very showy tubular, trumpet-like flowers occur in groups of three and are purplish-pink to magenta in color. The flower clusters radiate from a common center like spokes of a wheel with stems covered in very short, stiff hairs. The round basal leaves are thick, densely hairy, and leathery.

Round-leaf four o’clock is very rare, found only in Custer, Las Animas, Fremont, and Pueblo counties in Colorado.  Most of the plants are known from an area along the Arkansas River between Pueblo and Canon City.  Round-leaf four o’clock flowers in June and can be seen growing along roadsides of the appropriate geology.

The flowers of this four o’clock open before dawn and remain open until mid-morning, just a few hours.

The round-leaf four o’clock is restricted to a narrowly distributed geological substrate, barren limestone plateaus, or shale outcrops of the Niobrara Formation. This showy plant is found in sparse shrubland or woodland with rock on the surface (>20% rock fragment). Often found with a shrub restricted to similar geology, James Frankenia.  Other associated species found with round-leaf four o’clock include Indian ricegrass, shadscale, buckwheat, plains zinnia, broom snakeweed, bladderpod, or one-seed juniper.  While sometimes found adjacent to roads, it has not been found in road cuts or other areas altered by human uses. 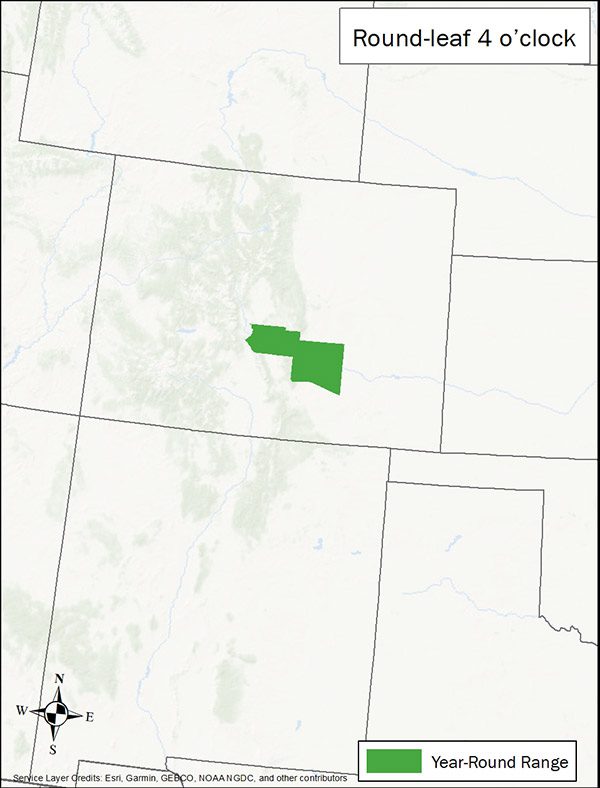 Since many of the round-leaf four o’clock populations occur on private land, landowners have an important role to play in the survival of the species. Maintain intact shrublands and woodlands on shale outcrops and barren limestone areas.  These areas are naturally sparsely vegetated, and only certain plants tolerant to the conditions can grow on them. Livestock grazing is compatible when done at moderate stocking levels and using rotational grazing.  As these areas are naturally sparsely vegetated, livestock will not spend much time in areas with these rare plants.

Management of native playa habitat will benefit other species that rely on playas, including tiger salamanders and migratory waterfowl, and wading birds.