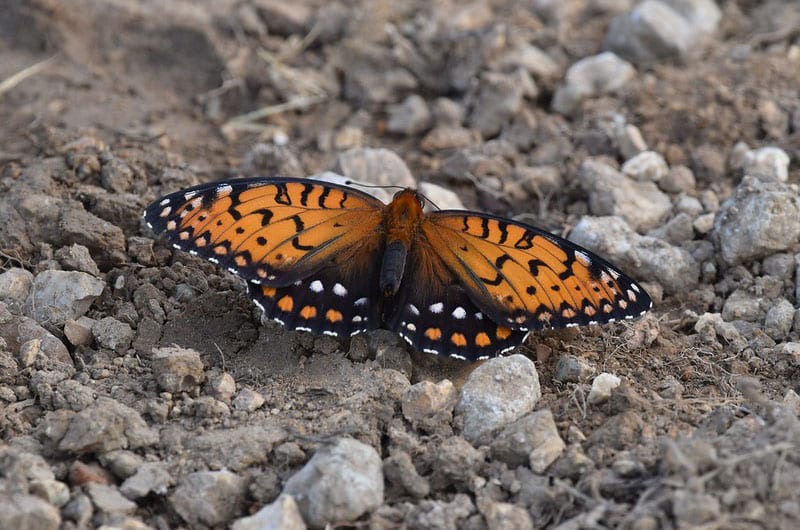 The regal fritillary is thought to be one of the most spectacular Temperate Zone butterflies in the world, especially females are striking when seen in the field.

The regal fritillary is slightly smaller than a monarch with a wingspan of 2.5–4.2 in/6.7-10.5 cm. The upper side of forewing is bright red orange with black markings. The upper side of hindwing is black with postmedian (behind the middle) row of white spots with a row of spots near the lower margin that is orange in male and white in female. On females the forewing is edged with a black marginal band with a postmedian row of white spots. The underside of the forewing is orange with a marginal band of white spots and a black fringe. The underside of the hindwing is dark greenish brown with elongated white spots. No butterfly anywhere in the world resembles the regal fritillary

The regal fritillary has possibly 100 stable populations throughout the Great Plains and is no longer found in much of New England and the mid-west down through Appalachia. Adult emergence begins in late May in the southern and warmest parts of its range and late into July for northern regions. Males typically live one month with females living approximately two months.

The regal fritillary is thought to be one of the most spectacular Temperate Zone butterflies in the world, especially females are striking when seen in the field.

Adults require abundant nectar sources and will utilize different species over their lifetime. Regal fritillary have been known to use milkweeds, blazing stars, thistles, coneflowers and other tallgrass prairie flowers.

Females lay up to 1,000 eggs near but seldom on violets. Eggs are laid on the ground, dead leaves and pebbles by females walking through the vegetation. Caterpillars hatch and overwinter without feeding. In spring, typically in April, they eat the leaves of the violets. 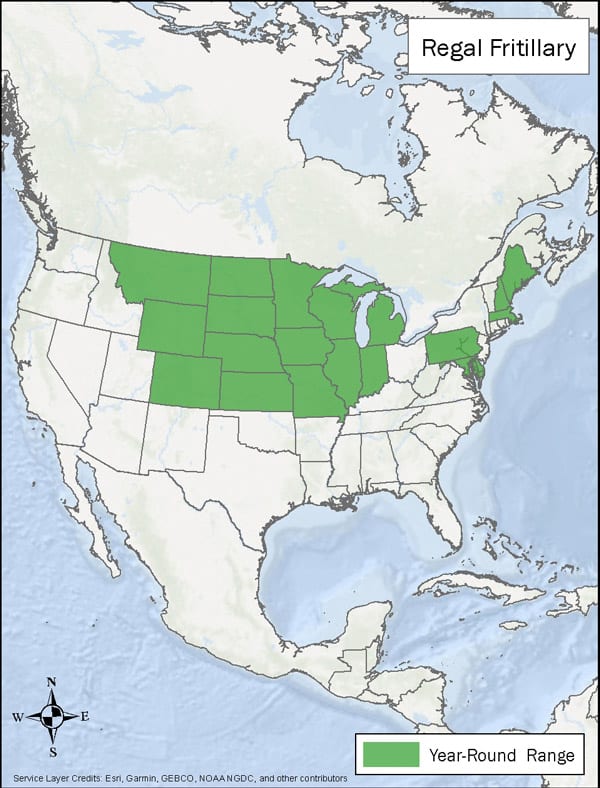 The principal need is for its prairie habitat to be protected and appropriately managed. In addition to habitat loss to development agriculture, remaining prairie has been affected by pesticide use and fire (usually excessive prescribed burning) in ways that impact butterfly populations). More data are needed, but light to moderate grazing may be highly favorable to regal fritillaries or their foodplant. Burning can be beneficial as long as it does not encompass the entire colony and several years are left between burns. Species of violets probably does not matter but abundance of violets in open habitats is important.

The most critical threat to the regal fritillary is loss of its prairie habitat to development and agriculture. In addition, many remaining prairie fragments are inappropriately managed for the butterfly, especially by ill-timed and extensive or annual prescribed burning. Allow five or more rest years before reburning a unit if possible. In general burn no more often than the minimum required for the vegetation community.

Management for regal fritillary benefits other tallgrass obligate species including Dakota skipper and other prairie butterflies.