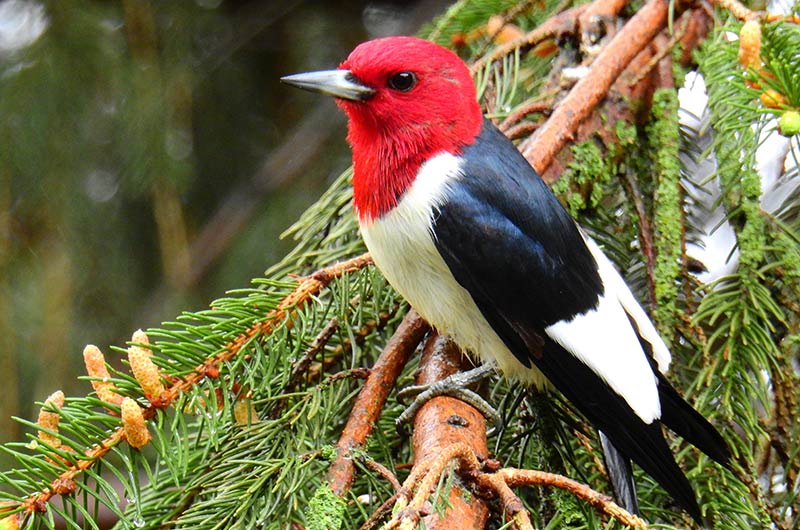 Red-headed woodpeckers eat the most insects of any woodpecker, sometimes caching grasshoppers alive in a tree crevice so they can be eaten later. Red-headed woodpeckers are also one of the few woodpeckers to store food for later and is the only one known to cover stored food with wood or bark. They may also store nuts and acorns in human structures, like in gate posts and under roof shingles.

The red-headed woodpecker is a medium-sized woodpecker (7.5-9 in/19-23.5 cm in length) that is easily recognized by its bold coloring. Males and females look similar with a red head, a white body, and black wings with large white patches.

Compared to other woodpeckers, the red-headed woodpecker is as likely to be seen catching insects on the fly as it is storing away acorns and nuts in a tree crevice. Look for its checkerboard-pattern in a variety of open woodlands, and listen for a tapping or drumming or its shrill tchur call. Red-headed woodpeckers are found year-round in the eastern U.S., while populations in the northern and central Great Plains migrate to the southern and southeastern U.S. for the winter. However, they do move around between and within seasons, depending on food availability.

Red-headed woodpeckers eat the most insects of any woodpecker, sometimes caching grasshoppers alive in a tree crevice so they can be eaten later. Red-headed woodpeckers are also one of the few woodpeckers to store food for later and is the only one known to cover stored food with wood or bark. They may also store nuts and acorns in human structures, like in gate posts and under roof shingles.

Red-headed woodpeckers breed in a variety of open woodlands, provided there is >5% canopy cover with dead (or partially dead) standing snags for nesting and perching. They commonly breed in deciduous woodlands of oak or beech, pine or pine-oak forests, river bottoms, disturbed areas such as those logged or burned, swamps, orchards, parks, and also grasslands with scattered trees. They typically prefer woodlands with taller trees and larger diameters. Dead standing trees are necessary during the breeding season as red-headed woodpeckers nest in tree cavities. Trees used for nesting are often in fields or open woodlands with little understory. In the winter, they primarily use mature stands of oak, oak-hickory, maple, ash, and beech in the northern part of their range, and further south, they use pine and pine-oak woodlands predominantly. 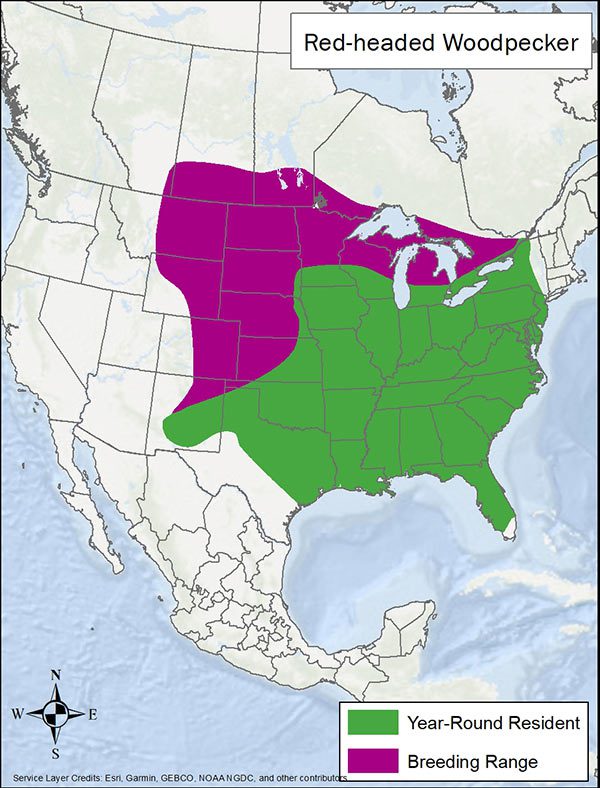 To promote habitat for red-headed woodpeckers, leave snags and dead branches, in groups if possible, for foraging perches and nesting sites. Use selective thinning of live trees to convert dense forest into more open woodland and retain some large trees and snags. Prescribed burning and understory thinning may also open up forest stands and create more foraging opportunities for red-headed woodpeckers.

Avoid the use of insecticides in nesting or foraging areas, especially during the breeding season. Avoid removing dead standing trees or dead branches following a fire or other disturbance. Avoid activities that encourage European starlings, which can displace red-headed woodpeckers from nest sites.

Other species that may benefit from habitat management for red-headed woodpeckers include eastern bluebirds, tree swallows, and red-cockaded woodpeckers.

BirdLife International and Handbook of the Birds of the World. 2019. Bird species distribution maps of the world. Version 2019.1 Red-headed Woodpecker

The Cornell Lab of Ornithology, Birds of the World Red-headed Woodpecker

The Cornell Lab of Ornithology. All About Birds Red-headed Woodpecker