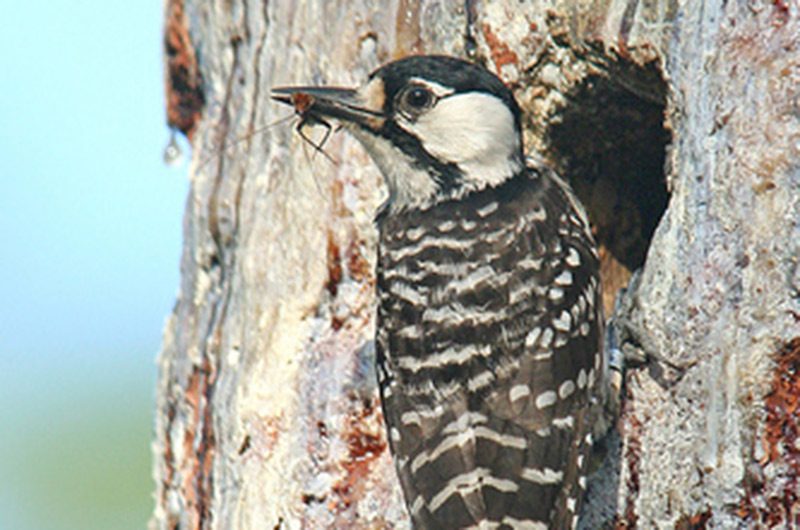 The red-cockaded woodpecker is a relatively small black and white woodpecker (7 in/18-20 cm) with a longish bill.  The back of the woodpecker is black with white stripes. The belly is white with black spots or streaks on the sides. The red-cockaded woodpecker has a black crown, nape, and stripe to the beak with white cheeks and side of neck. Males have a small red mark on the back of the head. Their wingspan is approximately 15 in/35-38 cm. The historical range was throughout the southeastern United States, however habitat quality and quantity has reduced suitable habitat by 97%.  Red-cockaded woodpecker is considered Endangered in the United States, although recently proposed that successful recovery efforts warrant a Threatened status.

Red-cockaded woodpeckers are cooperative breeders, so can be found in family groups in open pine woodlands that are at least 80 years old. Groups are usually a pair with up to five helpers, typically offspring from the previous year. Helpers incubate eggs, feed nestlings and fledglings, and defend territories. Many groups are found on federal and state-protected lands.

Red-cockaded woodpecker inhabits fire-dependent open mature and old growth pine woodlands (<40% tree cover and >35% herbaceous cover) dominated by mostly longleaf pine, as well as shortleaf, slash, or loblolly pines. Because they are a cooperative breeder, each group of birds requires at least 80 ha/200 ac of habitat. Nesting trees are thought to be selected based on sufficient size, living heartwood with red-heart fungus, and the amount of resin that can protect the nest holes from predators, including climbing rat snakes. Trees must be 80 to 100+ years old, depending upon the species. Larger and more successful breeding groups are found in areas with few clear cuts. 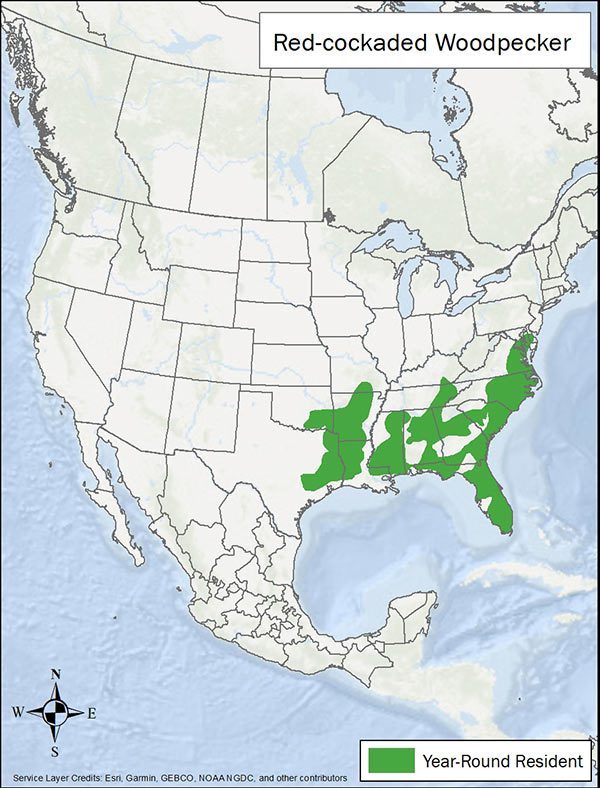 Managing for open mature pine forests will benefit red-cockaded woodpeckers. Where trees are less than 80 years old, artificial cavities can be installed to provide nesting sites.  If you are willing to participate in this program, contact your local Wildlife agency for more information. Prescribed burning programs keep pine forests open and remove encroaching hardwoods.  If hardwood trees grow tall enough to reach the cavity, red-cockaded woodpeckers have been known to abandon the area because the nesting tree is available to nest predators and competitors such as rat snakes and flying squirrels.

BirdLife International and Handbook of the Birds of the World. 2019. Bird species distribution maps of the world. Version 2019.1.Red-cockaded woodpecker