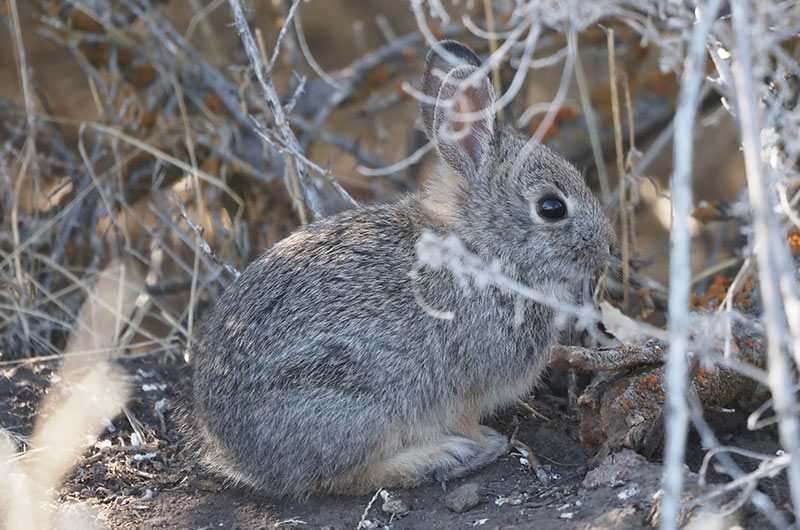 Pygmy rabbits are the only rabbit in the US that digs its own burrow. They also produce alarm vocalizations to communicate in response to threats, which is uncommon among rabbits.

The pygmy rabbit is the smallest rabbit in North America, growing up to 11 in/28 cm in length and weighing less than 1 lb/ 454 g. Ears are very short, rounded and densely haired inside and out. Fur is brown to slate gray in color, depending on the season and belly hair is white, tinged with buff. Females are slightly larger than males. Pygmy rabbits move by scurrying rather than hopping. They are mostly active and feeding during twilight hours but can be seen feeding any time during the day. Pygmy rabbits are easy to tell from the more-common mountain cottontails that share their range as they don’t have the white “cotton” tail, rather an inconspicuous tail that is buff on the underside.

Only thrives in the biggest, healthiest sagebrush areas and one of the hardest-to-spot animals in North America. Look for multiple burrows with 3 in/ 7.5cm entrances at the base of sagebrush.

Pygmy rabbits are the only rabbit in the US that digs its own burrow. They also produce alarm vocalizations to communicate in response to threats, which is uncommon among rabbits.

Pygmy rabbits have very specific habitat requirements as they prefer dense, large sagebrush stands and gentle slopes for their burrows. They depend on sagebrush for both food and shelter throughout the year. Sagebrush composes 99% of their diet in the winter. During spring and summer, their diet is about 50% sagebrush, 40% grasses (particularly native bunchgrasses), and 10% forbs. Pygmy rabbits usually burrow in areas of tall and dense sagebrush, 1.5-7 ft/0.5-2 m tall, with a canopy cover 20-46% shrub, for protection from predators and severe weather. They can occupy less ideal habitats and will always burrow in the tallest and most dense sagebrush areas, which may include stands of big sagebrush along streams, roads, and fencerows.

Pygmy rabbits typically dig their burrows in deep, >20 in/51 cm, loose soils at the base of sagebrush plants. They occasionally build soil mounds or use burrows abandoned by other species in shallower or more compact soils with adequate shrub cover. As pygmy rabbits have very specific habitat requirements, management that maintains appropriate sagebrush habitat or improves sagebrush habitat is beneficial. For example, improving degraded sagebrush areas may be done through controlling non-native weed species, or pinyon-juniper. If mechanical or chemical brush treatments are necessary, they should be targeted leaving large swaths and corridors of sagebrush intact that are at least 54 yd/49 m across in any direction. Adverse impacts of fire may be minimized if burns are small and occur in a mosaic pattern to minimize habitat fragmentation and barriers to movement. Burned areas can be reseeded and planted with big sagebrush. Seeding on snow or aerial seeding in the fall successfully establishes seedlings. Areas planted or seeded with big sagebrush may need to be protected from livestock grazing for several years until well established.

Avoid loss or modification of sagebrush habitat through agricultural conversion, road development, mechanical treatments (such as mowing or plowing), or chemical treatments (herbicide). These activities are the most significant factor for pygmy rabbit population decline causing temporary or permanent home range abandonment, increasing habitat fragmentation, dispersal barriers, and increasing predation. Avoid the complete loss of sagebrush in large areas. Avoid large-scale burning as it will result in habitat loss, as big sagebrush is often completely killed by fire and is slow to reestablish.

Other species including greater sage-grouse and other sage obligate species benefit from similar habitat management.