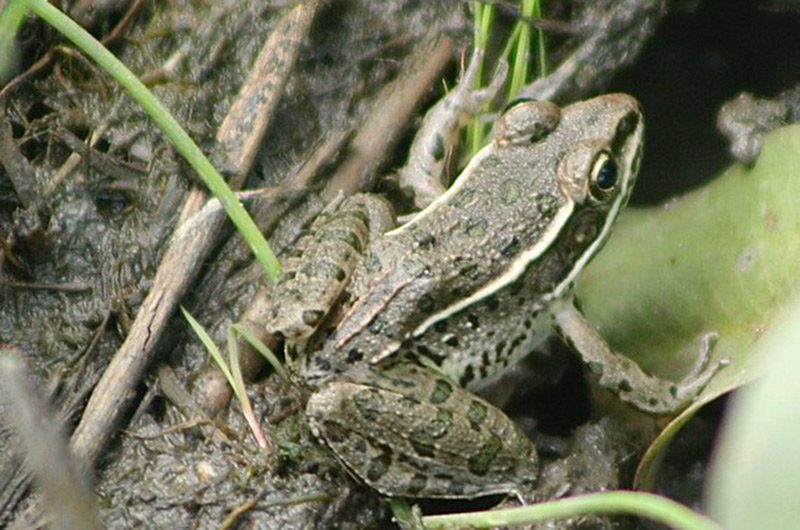 Females lay up to a few thousand eggs from spring to early fall in temporary or permanent water sources, including ponds, flooded areas, marshes, and sloughs, often in muddy water. Tadpoles that hatch early will become young frogs by summer, while those from later clutches spend winter as tadpoles and become frogs the following spring.

The plains leopard frog is common in or near water in the Southern Great Plains of the United States. Current populations occupy most of their presumed historical range, which is from eastern Colorado and New Mexico to northwestern Indiana, from southern South Dakota to Texas, and along the Mississippi River to Missouri. A small (possibly introduced) population occurs in Arizona. Plains leopard frog females are larger than males, with adults reaching 2-4 in/5-10 cm in length. They are typically brown with dark spots (giving them the leopard frog name), a white belly, and light-colored ridges from the eyes to the hips, with a break near the legs.

Plains leopard frogs can be seen among the vegetation surrounding water. Males may be heard before they’re seen with a series of rapid clucks while floating on the surface of water. Plains leopard frogs are active most of the year, depending on location, and spend winter buried in mud and vegetation underwater.

Females lay up to a few thousand eggs from spring to early fall in temporary or permanent water sources, including ponds, flooded areas, marshes, and sloughs, often in muddy water. Tadpoles that hatch early will become young frogs by summer, while those from later clutches spend winter as tadpoles and become frogs the following spring.

The plains leopard frog is found in a variety of aquatic habitats, including streams, reservoirs, ponds, marshes, wetlands, and irrigation ditches in prairie, former prairie, and desert grasslands. Plains leopard frogs are more tolerant of dry landscapes than other leopard frogs and will occasionally travel short distances across land, especially after rain. Some individuals will migrate across upland and riparian habitat to new breeding areas. They are generally found within 3 mi/5 km of perennial water. 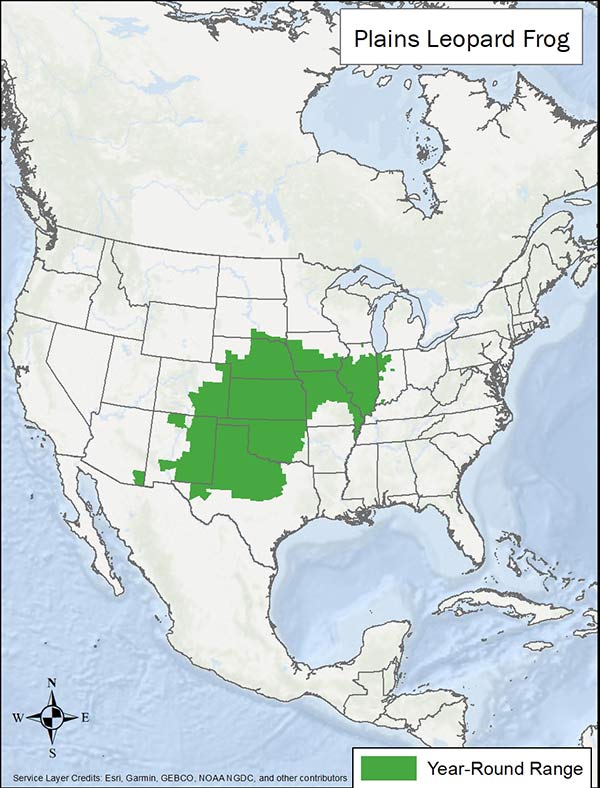 Protect water sources, including small breeding ponds and surrounding areas, to provide habitat throughout the frog’s life cycle. Minimize the use of chemicals and sterilize boots and other equipment after working in and around ponds to prevent disease transmission. Where possible, remove invasive predatory fish from plains leopard frog water sources. Restrict vegetation trampling around water with livestock fencing and watering points or provide stock tanks outside of these fenced areas.

Avoid developing land near and within plains leopard frog habitat. Avoid introducing nonnative species such as bullfrogs and predatory fish into plains leopard frog water sources, which can decimate populations through predation and disease introduction. Avoid pesticide and fertilizer use near where plains leopard frogs live, or on lands that drain to these areas. Avoid cattle grazing in and directly adjacent to breeding ponds, which can also cause nitrogen buildup and can kill tadpoles.