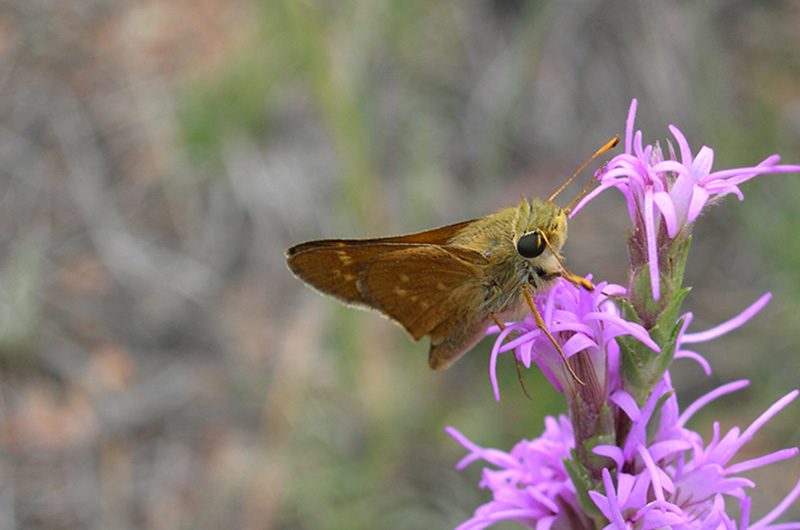 The Pawnee montane skipper habitat has been threatened by the proposed Two Forks dam and reservoir which would have inundated and destroyed 22% of the skipper’s habitat with an estimated loss of 23-42% of the population. Two large recent fires, Buffalo Creek Fire and Hayman Fire affected nearly half of the skipper habitat.

The Pawnee montane skipper is a small butterfly in the skipper family whose wingspan measures just over 1 in/2.5 cm. Their wings are a brownish yellow with brown to off-white spots on the outer margins of the wings. In females, the spots occurring on the lower portion of the wing are larger and tend to be whiter. This butterfly is listed as Threatened in the United States.

Adult Pawnee montane skippers can be observed in August and September and are often found near their main source of nectar, prairie gayfeather, also known as prairie blazing star. Other known native nectar sources for these skippers include beebalm, geranium, sunflower and senecio. The known populations of this species occur in the South Platte River Drainage of the Front Range of central Colorado occurring in four counties: Teller, Park, Jefferson, and Douglas.

The Pawnee montane skipper habitat has been threatened by the proposed Two Forks dam and reservoir which would have inundated and destroyed 22% of the skipper’s habitat with an estimated loss of 23-42% of the population.  Two large recent fires, Buffalo Creek Fire and Hayman Fire affected nearly half of the skipper habitat.

Pawnee montane skippers thrive best in open ponderosa pine woodlands with approximately 30% canopy cover and tree density of less than 200 per ha/494 per ac. Blue grama grass is the larval food plant where the skippers lay their eggs and the larvae overwinter. The primary nectar plant is prairie gayfeather with skipper densities positively correlated with gayfeather densities. Ideally prairie gayfeather density ranges from 50-500/acre or 20-200/ha. Therefore, blue grama grass and prairie gayfeather should be present in the understory and widely distributed. Overall groundcover is generally <30%, with shrub and grass cover generally <10% in occupied habitat. 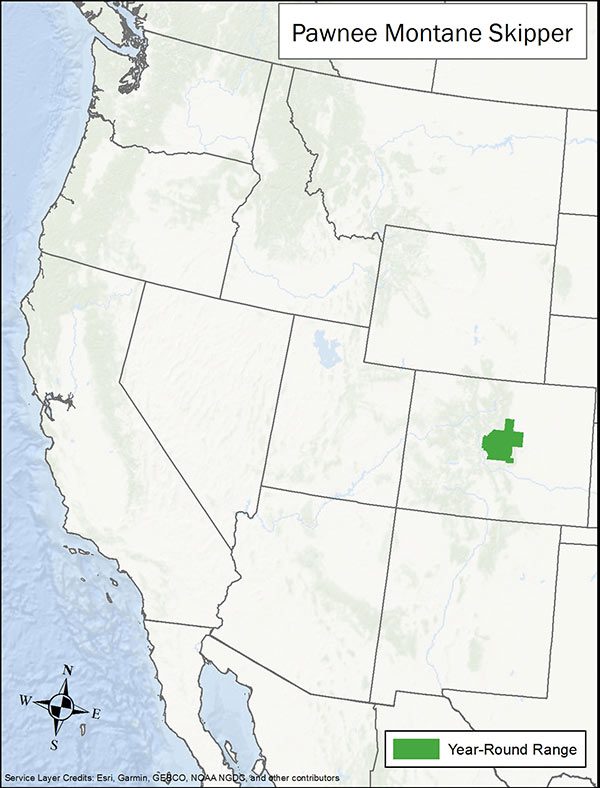 Maintain low density stands of ponderosa pine with open canopies and blue grama and prairie gayfeather in the understory.  An abundance of the skipper’s preferred nectar sources (prairie gayfeather) should be maintained or increased. Noxious weeds that may overtake blue grama grass and prairie gayfeather should be treated and controlled. A large part of the habitat has burned in recent years including areas of the Buffalo Creek and Hayman fires.  Skipper populations have recovered in low severity burn areas so creating conditions where low and mixed severity burns will occur through prescribed burning and fuel treatments will benefit Pawnee montane skippers. Fuel treatments, specifically forest thinning is known to benefit skipper densities.