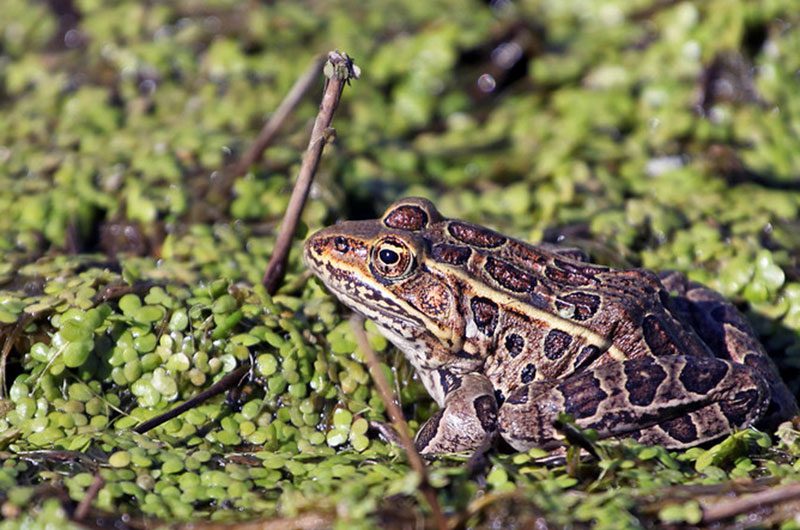 Northern leopard frogs get their name from the leopard-like spots on their backs and limbs. Each spot is dark brown with a lighter “halo” around it. There are two color variations. One, called the burnsi phase, has a solid, spotless back and spots or bars on the legs. The other, called the kandiyohi phase, is mottled across the back and side.

Female northern leopard frogs lay an egg mass with hundreds to thousands of eggs in still, shallow water from April to late July, depending on latitude and elevation. Tadpoles become young frogs by late summer. Tadpoles are dark brown, green or gray with flecks of gold and black, 2-4 in/5.5-10 cm long. Tadpoles can be distinguished from American bullfrog tadpoles by their size (bullfrog tadpoles are larger, up to 4.5 in/11.5 cm) and the absence of gold flecks. Adults eat a variety of insects, spiders, crustaceans, and anything else they can catch.

Northern leopard frogs are active day and night, and they are often heard before being seen, especially during breeding. Listen for a variety of chuckles, snores, and grunts. When inactive, northern leopard frogs will take cover underwater or in caves. They spend winter (October/November to March/April) underwater below the freeze line. They are often found in wet meadows and grasslands in the summer. Individuals may wander from water sources during rain but typically return to their home water source.

Northern leopard frogs get their name from the leopard-like spots on their backs and limbs. Each spot is dark brown with a lighter “halo” around it. There are two color variations. One, called the burnsi phase, has a solid, spotless back and spots or bars on the legs. The other, called the kandiyohi phase, is mottled across the back and side.

Northern leopard frogs require a variety of habitat types throughout their lifecycle. Adults can inhabit any permanent water body with rooted vegetation, including springs, slow streams, marshes, bogs, ponds, lakes, reservoirs, and wet meadows and fields. During summer months, leopard frogs spend a lot of time on land in low (<12 in/30 cm) and dense (60-90% herbaceous cover) vegetation where humidity and soil moisture is high. This over-summer habitat is often found within 33-65 ft/10-20 m of pond margins. 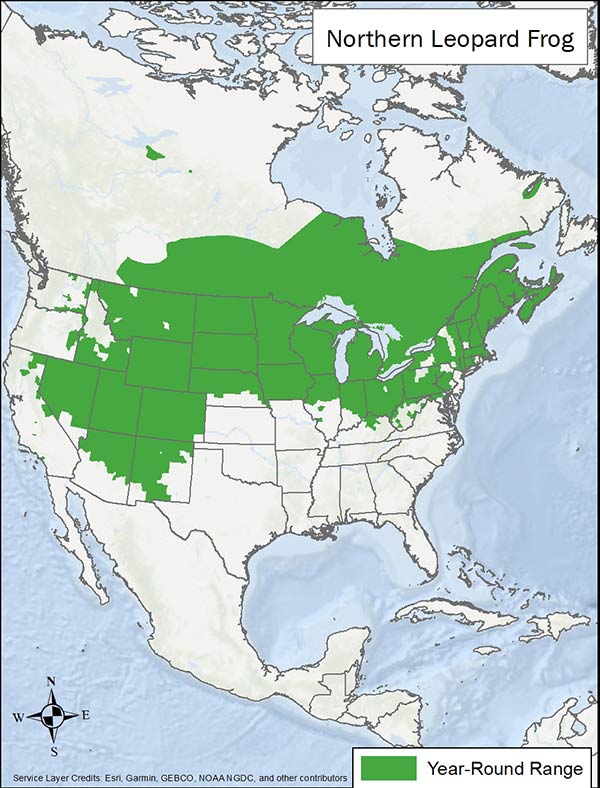 Northern leopard frogs are threatened by habitat loss, commercial overexploitation, and introduced species in some areas. Restrict unlimited livestock access and trampling of vegetation near breeding ponds and streams with fencing or provide stock tanks outside of these fenced areas. If vegetation is overgrown around breeding ponds, consider flash grazing or controlled burns in the nongrowing season to encourage new vegetation growth, which attracts insects the frogs eat. Controlled burns can also reduce the severity of future fires, resulting in sediment and debris that damages riparian habitats and impacts frogs.

Many species depend on and benefit from northern leopard frogs for prey at different life stages. Some of these species include great blue herons, pied-billed grebe, burrowing owls, snakes, fish, tiger salamanders, and some mammals. Other frogs, native fish, and wetland species also benefit from management practices. Humans benefit from a healthy frog population, as frogs eat a variety of pest insects.