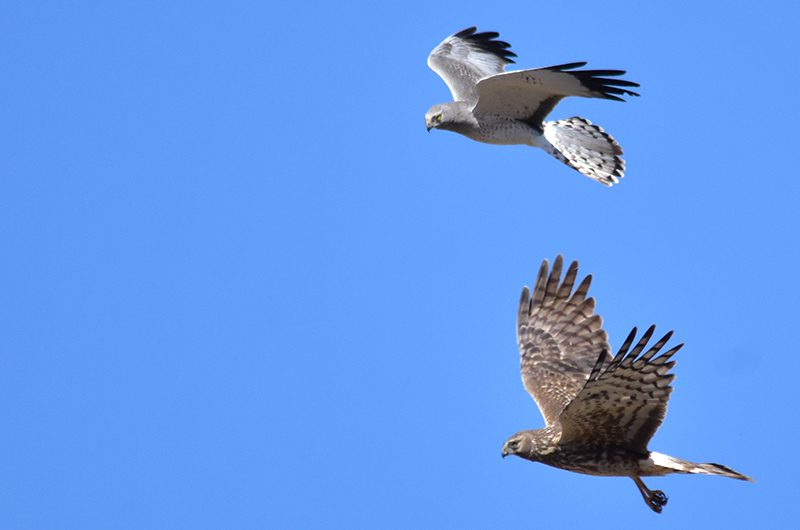 Northern Harriers are the most owl-like of hawks, though they are not related to owls. The disk-shaped face looks and functions much like an owl’s, with stiff facial feathers helping to direct sound to the ears. They rely on hearing and vision to capture prey, with its owlish face helping it hear mice and voles beneath the vegetation.

The Northern harrier is a ground-nesting raptor that is 16–20 in/41–52 cm long. The males and females are dimorphic, meaning they appear different; males are gray while females are brown. Both have a white patch at the base of the tail, easily notable in flight. They are distinctive at a distance: a slim, long-tailed hawk gliding or hovering low over a marsh or grassland, holding its wings in a V-shape.

The Northern harrier is a common hawk and can be seen year-round throughout much of the northern half of the United States, breeding across Canada and wintering in the southern half of the United States, Mexico, Central America and northern parts of South America. They arrive on the breeding grounds from late March to early April and nest through July. They usually migrate south from August to November. They are most noticeable in flight. Note the low, slow, coursing flight style, the bird’s V-shaped wing posture, and its white rump.

Northern harriers are the most owl-like of hawks, though they are not related to owls. The disk-shaped face looks and functions much like an owl’s, with stiff facial feathers helping to direct sound to the ears. They rely on hearing and vision to capture prey, with its owlish face helping it hear mice and voles beneath the vegetation.

Most nests are found in undisturbed wetlands or grasslands dominated by thick vegetation. Nests are on the ground and usually in a dense clump of vegetation such as willows, grasses, sedges, reeds, bulrushes, and cattails. 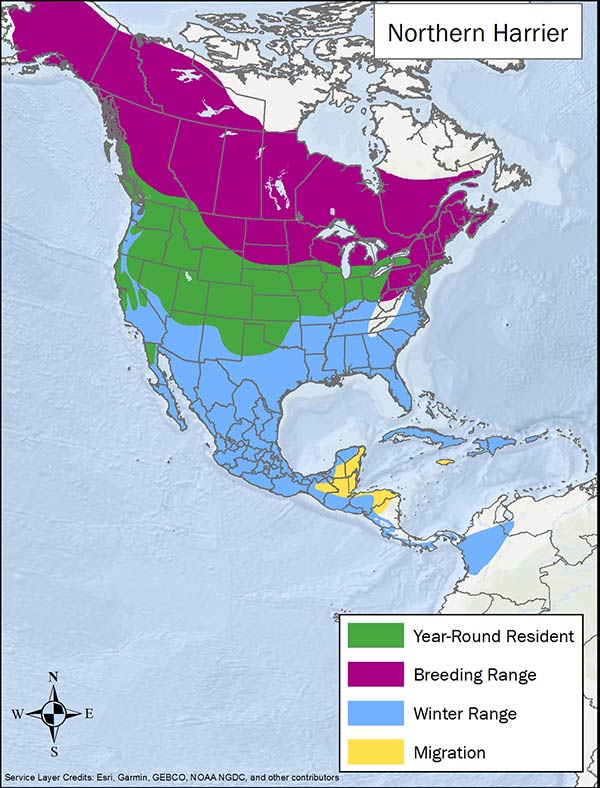 As Northern harrier’s nest on the ground, management that benefits the species is similar to management for grassland songbirds or game birds. Defer grazing through the spring in some areas, so taller vegetation is available during the breeding and nesting season. Maintain large areas of intact prairie with some shrubs. Land enrolled in the US Conservation Reserve Program (CRP) and planted with diverse native prairie species can provide suitable habitat.

In the tallgrass prairie region, burning or mowing every 3-5 years is recommended to maintain habitat for small rodent prey. Because nests are often built near wetlands, maintain these wet areas in natural condition, especially wetlands at least 20 ac/8 ha in size. Harriers forage in disturbed areas where prey is more visible, so heterogeneous conditions created through rotational grazing can provide a good landscape for harriers.

Avoid disturbances such as burning, haying, seed-harvesting, and mowing leading up to and during the nesting period (April to July).  Avoid heavy grazing and frequent burning or mowing in breeding areas to provide dense vegetation cover in the spring. Avoid draining and removing wetlands.

Other species that may benefit from habitat management for northern harrier include ferruginous hawks, Swainson’s hawks, lark buntings, and western meadowlarks.

BirdLife International and Handbook of the Birds of the World. 2019. Bird species distribution maps of the world. Version 2019.1. Northern Harrier

The Cornell Lab of Ornithology, Birds of the World (Northern Harrier)

The Cornell Lab of Ornithology, All About Birds (Northern Harrier)