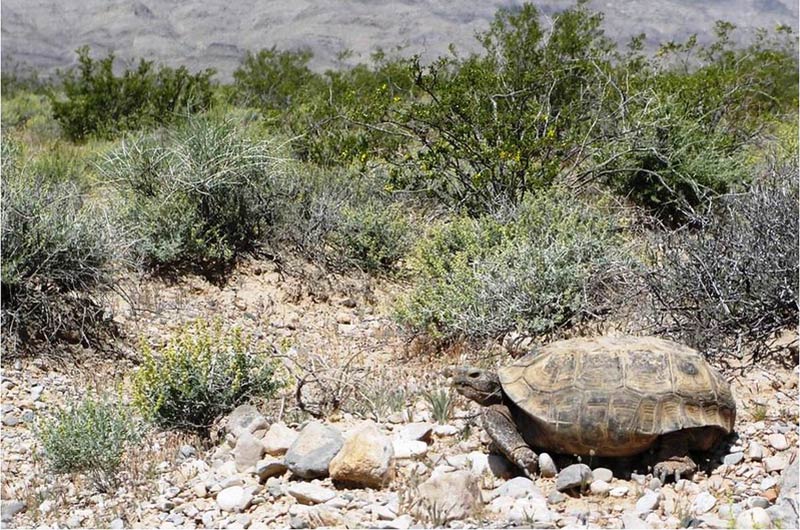 Desert tortoise eggs and young are prey for many species, including Gila monsters, snakes, raptors, skunks, kit foxes, and coyotes. Ravens can cause a substantial decline in desert tortoise populations, especially near developed areas. However, once a desert tortoise reaches adulthood, predation risk is far lower and annual survivorship surpasses 90%.

Mojave Desert tortoises males are larger than females and have curved horns on the lower shell, under the neck. Mature tortoises weigh between 8-15 lbs/3.6-7 kg, are 9-15 in/23-38 cm long, and can live between 30 and 50 years, though some individuals can live to be 80 years old. Their domed shells range in color from brown to gray to black, with patterned growth lines. The underside of the shell is lighter in color. They have a short tail and can retract the head and round legs completely into the shell when disturbed. The Mojave Desert tortoise is federally listed as Threatened in the U.S.

The Mojave Desert tortoise spends most of the day under a shrub or rock outcroppings or in underground burrows. They enter a light hibernation for several months each year when it is dry and hot to conserve water, when resources are scarce, and throughout winter (though they will occasionally emerge briefly during favorable weather). Desert tortoises are most active immediately following rain and when temperatures are between 79-93° F/26-30° C. In northern parts of their range, desert tortoises are most active during nesting season in May and June and in southern parts of their range in September to October when eggs hatch and young emerge from burrows

Desert tortoise eggs and young are prey for many species, including Gila monsters, snakes, raptors, skunks, kit foxes, and coyotes. Ravens can cause a substantial decline in desert tortoise populations, especially near developed areas. However, once a desert tortoise reaches adulthood, predation risk is far lower and annual survivorship surpasses 90%.

Mojave Desert tortoises are found exclusively in the Mojave Desert. They build burrows under rocks or shrubs and in hillsides where the soil is sandy loam (with gravel and clay) and >40 in/100 cm deep. They are found in flat (<4% slope) desert shrub habitats with high plant species diversity, including sandy flats, rocky foothills, alluvial fans, washes, canyons, cactus scrub, Joshua tree, and creosote shrublands. They depend on shrubs (10-30% cover) for shade and protection from predators. Desert tortoises eat a variety of wildflowers, grasses, and cacti. They get much of their water from succulents, but also drink from small pools following rain. 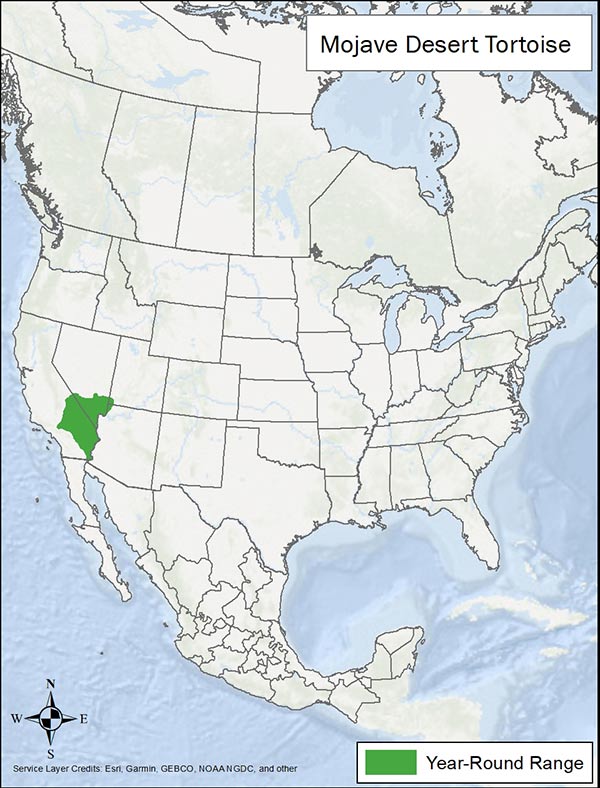 Nonnative grasses can reduce desert tortoise habitat availability and increase fire frequency, which can convert desert habitat into nonnative grassland. Encourage the growth of native grasses and prevent fire. Predation by wildlife may be reduced when other prey species, such as rabbits and rodents, are abundant. Add tortoise fencing to heavily utilized roads and drive cautiously to prevent tortoise deaths.

Desert tortoises are a keystone species due to their influence over the desert ecosystem. Other species that use desert tortoise burrows and benefit from their presence include white-tailed antelope squirrels, collared peccaries, roadrunners, burrowing owls, Gambel’s quail, and Gila monsters.