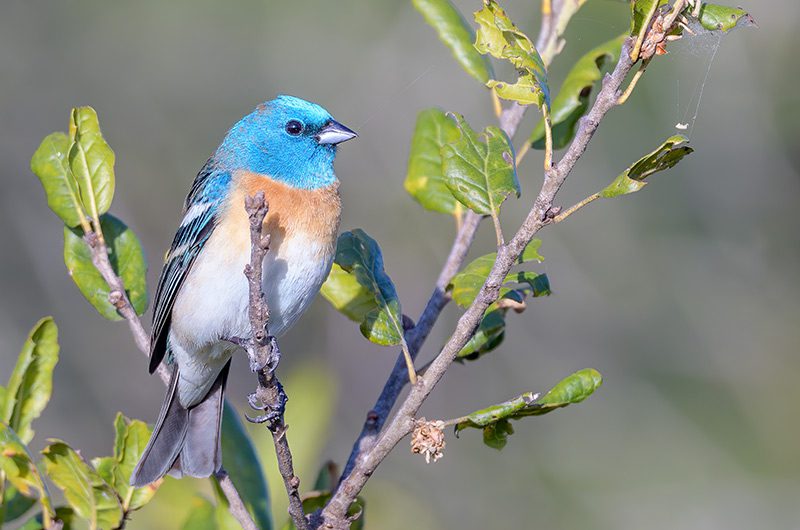 Birds can typically be identified by their song, but lazuli buntings make this a tad tricky. When young males arrive on their breeding grounds, they create their own unique song, which is a rearrangement of notes and syllables from other male lazuli buntings’ songs. They then sing their unique song every subsequent breeding season.

The lazuli bunting is a stocky songbird, about 5-6 in/13-15 cm long, with a cone-shaped bill. During the breeding season, males are bright blue above with an orange or rusty colored breast, white belly, and white shoulder patch. Females are grayish to rusty brown above, and have a tan breast with faded blue coloring on the wings and tail and two light-colored wingbars. 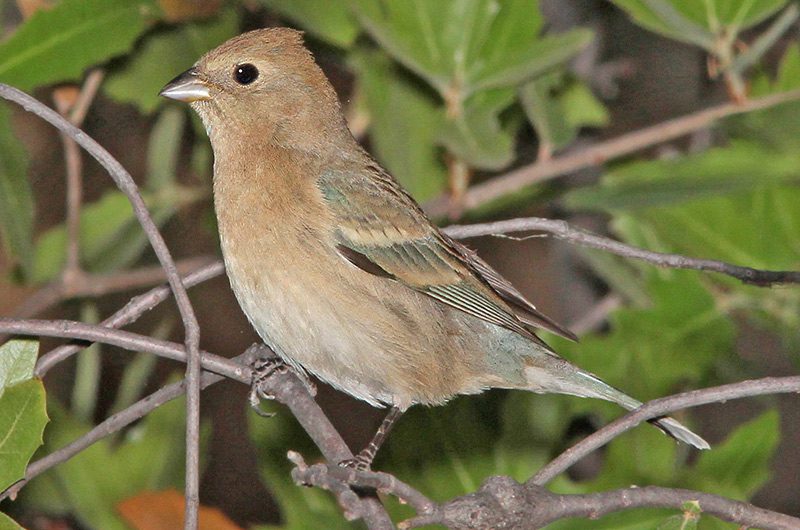 In the breeding season, look for a flash of brilliant blue in brushy hillsides throughout the western U.S. and southwestern Canada. Listen for the male’s sweet song of squeaky and buzzy notes as they perch on the tops of shrubs and trees. Male lazuli buntings will often keep singing throughout the summer, even after other birds have quit for the season. In the winter, look for them feeding individually, in small groups, or mixed-species flocks in weedy fields along the Pacific slope of Mexico.

Birds can typically be identified by their song, but lazuli buntings make this a tad tricky. When young males arrive on their breeding grounds, they create their own unique song, which is a rearrangement of notes and syllables from other male lazuli buntings’ songs. They then sing their unique song every subsequent breeding season.

Lazuli buntings breed in a variety of shrubby, early successional habitats from sea level to the Rocky Mountains, including brushy hillsides, thickets along streams and edges of crop fields, sagebrush shrublands, and suburban gardens. They may also use open woodlands, such as recently burned areas. Lazuli buntings are more likely to use recently burned woodlands rather than clear-cut or logged woodlands. They place nests within a shrub, typically close to the ground. Therefore, they need some shrubs to be present (>5% shrub cover). Habitat used during the winter in western Mexico includes weedy fields, thorn forests, crop fields, and early successional pine-oak forests. 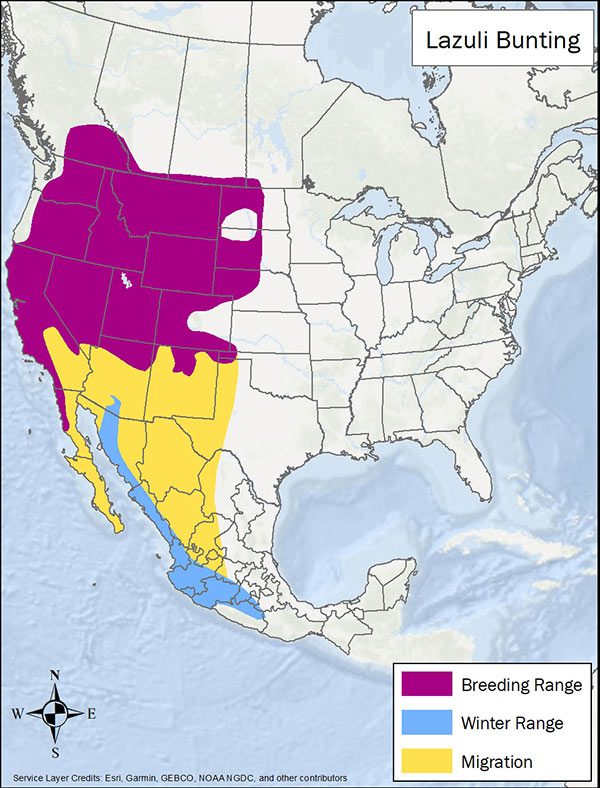 Maintain intact riparian habitat, such as willow thickets and montane shrublands. Lazuli buntings may be vulnerable to the nest parasitism of brown-headed cowbirds, so discourage brown-headed cowbird populations by using rotational grazing, which keeps livestock dispersed or moving, and periodically rest pastures for at least a year to promote brushy habitat.

Avoid conversion of montane shrublands and riparian areas to cropland or residential development to maintain brushy areas.  Avoid the use of pesticides in crop fields where lazuli buntings nest or winter nearby.

Other species that may benefit from habitat management for lazuli bunting include lesser goldfinch, spotted towhee, blue grosbeak, and song sparrow.

BirdLife International and Handbook of the Birds of the World. 2019. Bird species distribution maps of the world. Version 2019.1. Lazuli bunting

The Cornell Lab of Ornithology, Birds of the World Lazuli Bunting

The Cornell Lab of Ornithology. All About Birds Lazuli Bunting