Hispid pocket mice have coarse brownish-grey and black fur on the back with coarse white fur underneath separated by a lateral line. Buff to yellowish orange fur runs around the side of the head and under the eyes. The tail is approximately the same length as the body. Pocket mice collect seeds in fur-lined cheek pouches to store underground in their burrows or on the soil surface. Breeding occurs in the spring and summer, and the female can have several litters of 2-9 young. The mice are about 7.8-8.8 in/20-22.3 cm in length, and adults weigh between 1.4-2.1 oz/40-60 g.

Hispid pocket mice are generally solitary animals and spend daylight hours underground in shallow burrows and venture above ground to gather food at night. Their burrows are found under shrubs, have dirt mounds above the entrance, and are plugged with loose soil during the day. Hispid pocket mice remain inactive during colder winter months, however, they do not enter full hibernation.

The hispid pocket mouse prefers short and mixed-grass prairie where they feed on seeds from native grasses, although, they can also be found in and near cornfields where grain is abundant. They burrow in a variety of soils types that are loose, sandy, or friable. Hispid pocket mice prefer areas covered with sparse vegetation (<20%) and avoid dense and heavily vegetated areas. The hispid pocket mouse has been known to build nests using shredded dry grasses and weeds where it is placed into a pile and compacted by sleeping on the structure. They are commonly found in a variety of dry grassland habitats ranging from southern North Dakota through the Great Plains to Arizona, central Mexico, and western Louisiana. Hispid pocket mice are more abundant in interior prairie areas as opposed to edge plots in mixed grasslands. 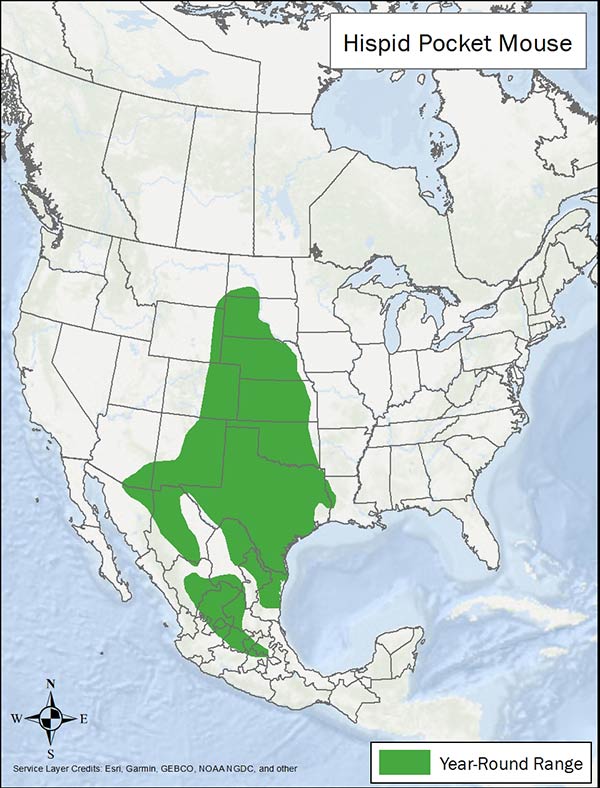 Maintain high quality grasslands with a variety of grasses to benefit the hispid pocket mouse.  Maintain intact grasslands to provide connected habitat because the pocket mouse has limited dispersal ability. The hispid pocket mouse is vulnerable to invasive plant species which can outcompete primary food sources such as seeds from native grasses, sagebrush, sunflowers and cacti fruit. As a result, noxious weed control via biological and chemical methods is a good practice. Hispid pocket mice are tolerant of, and sometimes benefit from fire and grazing as it maintains open environments with sparse vegetation that they prefer.

Disturbances that lead to habitat fragmentation and loss should be avoided. Specifically, avoid conversion of grasslands for agricultural and urban use or infrastructure and energy projects such as wind farms. Although hispid pocket mice can be found in and near crop fields, they are generally more abundant in nearby natural habitats.