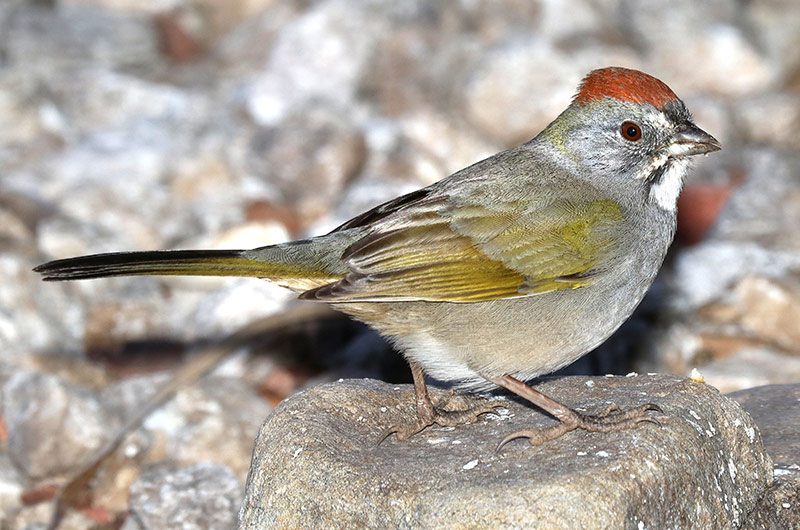 Green-tailed towhee pairs may attempt to renest four times or more during the breeding season if a nest fails. They will initiate a nest as late as mid-July, even though many leave the breeding grounds for their winter range by mid-August.

The green-tailed towhee is large for a sparrow at around 7.1 in/18 cm long. They are appropriately named for their long olive-green tails. Green-tailed towhees also have olive-green wings, a gray breast, a white belly and throat, and a rusty cap. Males and females look very similar, although some females may not be as brightly colored.

During the breeding season, look for the green-tailed towhee perched on a shrub and singing in dense shrubby habitat throughout the Intermountain West. You may also hear their cat-like, high-pitched mew calls. Otherwise, look for them feeding on the ground, scratching through leaf litter. They use mesquite and other scrubby habitats in the southwestern U.S. and Mexico during the winter and often feed in mixed-species flocks.

Green-tailed towhee pairs may attempt to renest four times or more during the breeding season if a nest fails. They will initiate a nest as late as mid-July, even though many leave the breeding grounds for their winter range by mid-August.

Green-tailed towhees live in shrublands year-round at various elevations. In the spring and summer, they are most often found in tall, dense shrubby habitat, including mountain shrubland and sagebrush communities with 5-30% shrub cover. They tend to use ecotones between sagebrush and other shrub communities with higher shrub and tree diversity, such as mountain mahogany, juniper, snowberry, serviceberry, chokecherry, snow bush, wild rose, and Gambel’s oak. They may also breed in montane conifer forest openings created by fire or other disturbance if there is shrubby regrowth and open pinyon-juniper woodlands with shrub-dominated understories. Green-tailed towhees nest in thick vegetation within a shrub or tree, typically 0.5 yd/0.5 m above ground. In the winter, they use dry washes, mesquite thickets, oak-juniper woodlands, and desert grasslands. 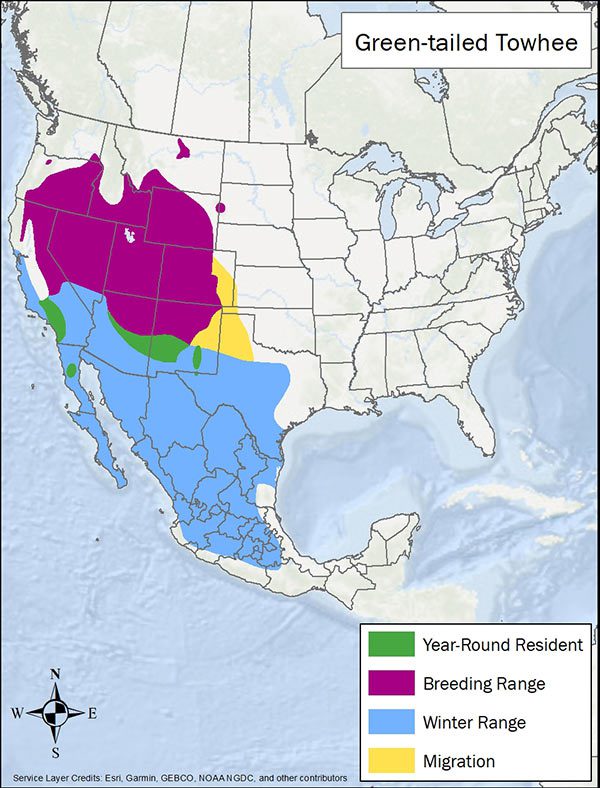 Avoid shrub treatments (e.g., mechanical thinning and herbicide application) as any activity that reduces shrub cover has the potential to impact this species negatively. Avoid fire suppression in montane conifer forests, which will reduce shrubby regrowth.

BirdLife International and Handbook of the Birds of the World. 2019. Bird species distribution maps of the world. Version 2019.1. Green-tailed Towhee

The Cornell Lab of Ornithology, Birds of the World (Green-tailed Towhee)

The Cornell Lab of Ornithology, All About Birds (Green-tailed Towhee)