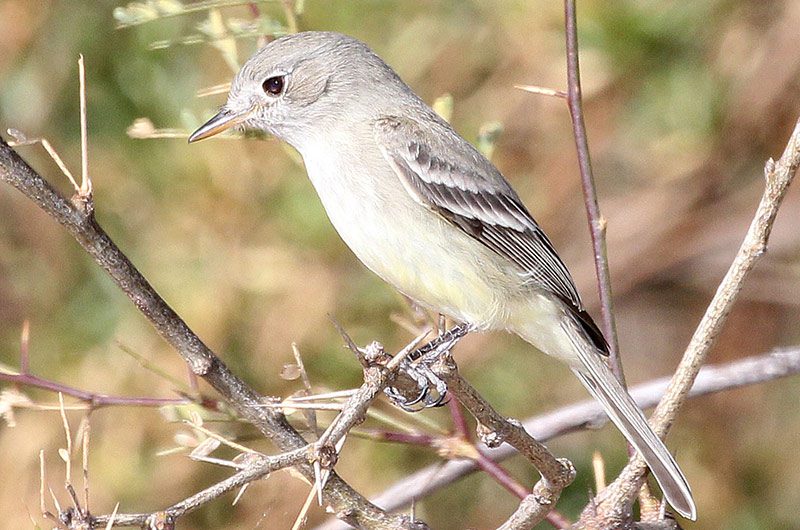 Until the early 1900s, gray flycatchers were believed to breed only in northern Mexico and then wander north in the U.S. in the fall. After discovering new information about gray flycatchers, such as their distinct downward tail wag, ecologists were better able to distinguish the species in the field from other similar-looking flycatchers and document its breeding range.

Gray flycatchers are drab, mostly gray birds with a thin, pale eye-ring and 5.5-6 in/14-15.5 cm in length. They are gray on top and whitish below with darker wings and two light-colored wing bars. They also have a long, thin bill. Males and females look similar.

Gray flycatchers can be seen feeding on insects in sagebrush shrubs or trees, especially juniper and pinyon pine, either in the vegetation or on the ground. They are best distinguished from other flycatchers by their downward tail wag as they sit on a branch. In the breeding season, look for gray flycatchers in pinyon-juniper woodlands, sagebrush shrublands, or pine forests in the Great Basin and Intermountain regions. In the winter, gray flycatchers move to western Mexico in open habitat with scattered trees and shrubs.

Until the early 1900s, gray flycatchers were believed to breed only in northern Mexico and then wander north in the U.S. in the fall. After discovering new information about gray flycatchers, such as their distinct downward tail wag, ecologists were better able to distinguish the species in the field from other similar-looking flycatchers and document its breeding range.

Gray flycatchers are most commonly found in arid woodlands and shrublands in and around the Great Basin, including the woodland-shrubland ecotone. They breed in open woodlands with a variety of evergreen trees, including junipers (Utah, one-seed, and western), pine (pinyon, ponderosa, Jeffrey, and yellow), and firs (white and Douglas). Canopy cover of trees should be >5%. Gray flycatchers also breed in sagebrush shrublands and commonly in tall, old-growth big sagebrush areas, typically found along valleys and washes. They usually place nests in pine or evergreen trees within 10 ft/3.3 yd of the ground, and also occasionally in shrubs. Winter habitat in Arizona includes mesquite bosques and streamside groves, while winter habitat in Mexico also includes subtropical thorn forest and scrub. 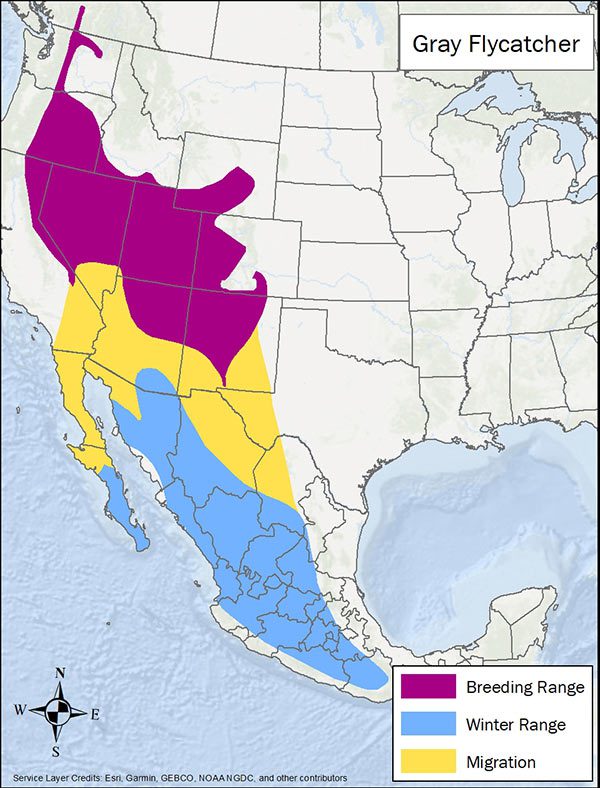 Avoid removing all shrubs and trees from an area, as this removes nesting cover and foraging opportunities. Avoid insecticide use and limit insecticide use to periods outside the breeding season. If chaining in pinyon-juniper woodlands to remove trees, limit clearing widths to 219 yd/200 m, use a light chain, and don’t chain during the winter. Avoid using prescribed fire in areas inhabited by gray flycatchers

Other species that may benefit from habitat management for gray flycatchers include pinyon jay, gray vireo, and Virginia’s warbler.

BirdLife International and Handbook of the Birds of the World. 2019. Bird species distribution maps of the world. Version 2019.1. American Grey Flycatcher

The Cornell Lab of Ornithology, Birds of the World Gray Flycatcher

The Cornell Lab of Ornithology. All About Birds Gray Flycatcher