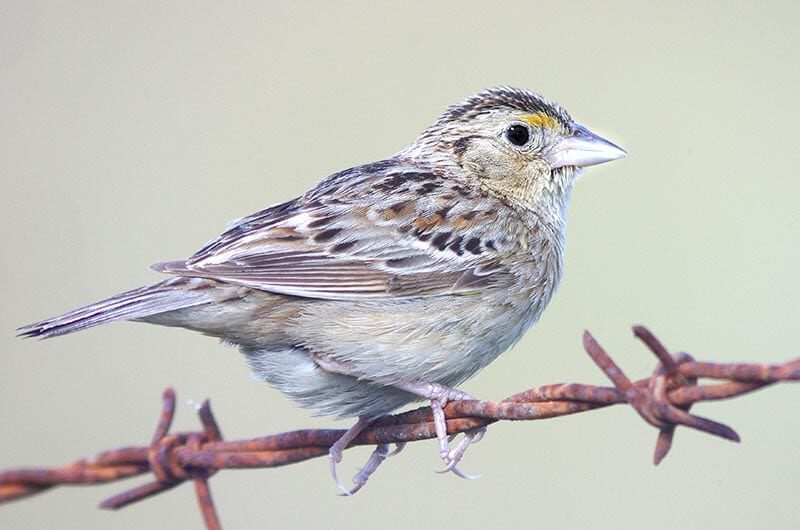 The grasshopper sparrow is one of the few North American sparrows that sings two completely different songs during the breeding season: one to attract females and one to defend a territory.

This sparrow has a flat, stocky head and orange-yellow patch between the eyes and nostrils extending thinly over and behind the eyes. It is small, 5 in/13 cm tall, about the size and shape of a house sparrow. The back is chestnut and gray with some dark brown markings. The throat is white or off-white. There is a buffy tinge on the breast and sides with faint brown streaking, and a plain white belly. The males and females look similar throughout the year.

They arrive to their breeding grounds in early May and the males sing an insect-like buzz (the origin of the bird’s name) from a fence or plant perch. When approached by a human, grasshopper sparrows often run along the ground rather than fly. This secretive sparrow prefers to migrate at night and will leave for its wintering grounds in the southern U.S. and Mexico in September.

The grasshopper sparrow is one of the few North American sparrows that sings two completely different songs during the breeding season: one to attract females and one to defend a territory. Its primary song is given from a perch and is reminiscent of an insect buzzing. Its secondary song, longer and more musical than the primary song, can be given from a perch or in flight.

Grasshopper sparrows are found in most types of grassland, such tallgrass and mixed-grass prairies, but also shortgrass, especially where scattered shrubs or other tall plants are present. They are also found in Conservation Reserve Program lands, which if planted with taller plants, provide the only suitable habitat in some parts of the shortgrass prairie. They lay their nests on the ground in native grasslands and will nest in fallow fields with tall weeds. Grasshopper sparrows require some areas of bare ground, up to 35% of their territory, since they forage on the ground. In general, they prefer large tracts of grassland where much of the vegetation is >4 in/10 cm tall. In the eastern portion of their range, grasshopper sparrows breed in drier, sparser sites, whereas they prefer thicker, brushier sites in shortgrass prairie in the western portion of their range. 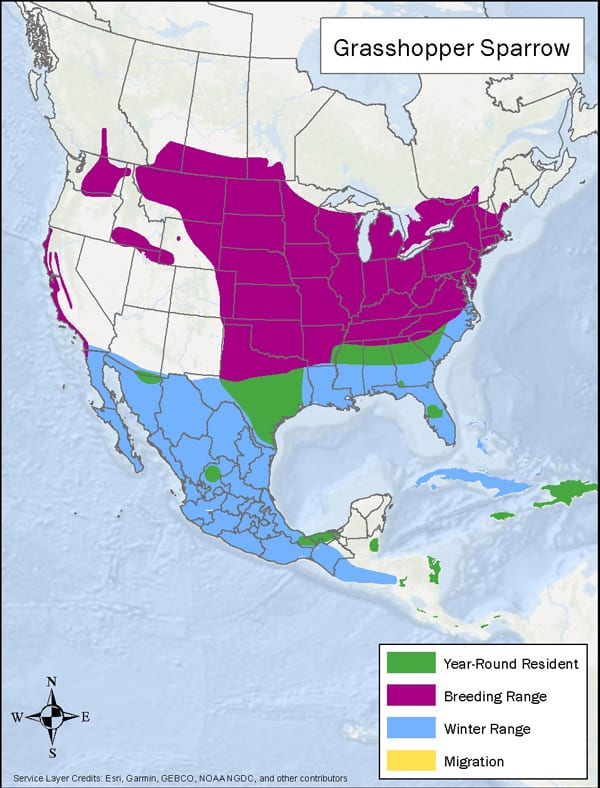 Provide intact pastures and grassland parcels of >30 ac/12 ha because grasshopper sparrows prefer large tracts of suitable habitat. Nests in smaller tracts are more likely to be found and destroyed by predators. Graze tallgrass light or moderately as they are secretive and prefer denser cover for nesting. Use a flush bar or similar device if mowing occurs before mid-July. If pastures of shortgrass prairie are burned, they should be burned at relatively long intervals (>8 years), as they prefer some shrubs and some mid to tall grasses.

Other wildlife that may benefit from habitat management for grasshopper sparrows include ring-necked pheasants, greater and lesser prairie-chickens, upland sandpipers, vesper sparrows, and eastern and western meadowlarks.

BirdLife International and Handbook of the Birds of the World. 2019. Bird species distribution maps of the world.  Version 2019.1. Grasshopper sparrow.

The Cornell Lab of Ornithology. Birds of the World (Grasshopper sparrow).

The Cornell Lab of Ornithology. All About Birds (Grasshopper sparrow).