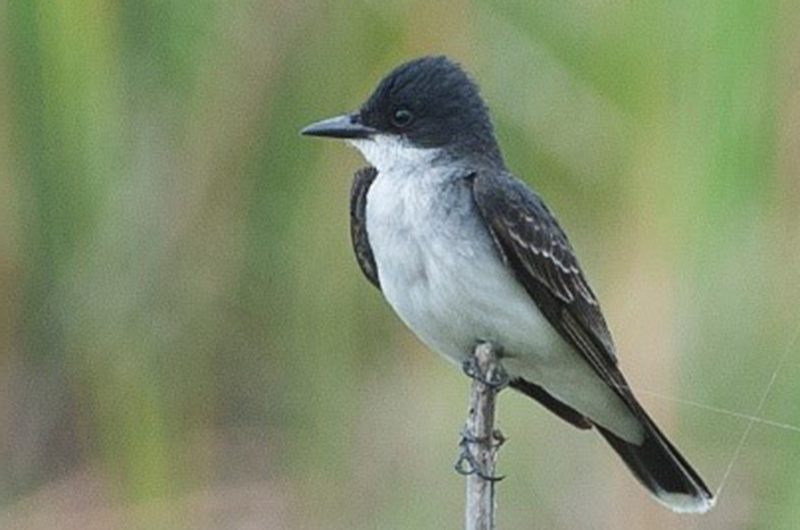 The eastern kingbird lives a double life each year. They eat mostly flying insects during the breeding season and aggressively defend their nest and territory from other kingbirds and much larger birds, like hawks and crows. However, during the winter, the eastern kingbird eats mostly fruit and lives in a flock of other birds.

Eastern kingbirds are 8-9 in/19.5-23 cm long flycatchers. Males and females look similar with a contrast of blackish above and white below with a black head. Their square-shaped tails have a distinct white tip.

In the spring and summer, eastern kingbirds can be seen perched atop trees, fences, or utility lines. They fly out to catch insects from their perch with shallow wingbeats and a raised head. Like other kingbirds, they also scold and chase other birds to maintain their breeding territories. Males sing a series of buzzy, high notes and give high-pitched, electric-sounding calls. During the breeding season, eastern kingbirds are widespread from the east coast westward to the Pacific Coast in Washington. They migrate through Central America and spend winters in western South America.

The eastern kingbird lives a double life each year. They eat mostly flying insects during the breeding season and aggressively defend their nest and territory from other kingbirds and much larger birds, like hawks and crows. However, during the winter, the eastern kingbird eats mostly fruit and lives in a flock of other birds.

Eastern kingbirds breed in a variety of habitats across North America: fields with scattered shrubs and trees, orchards, shelterbelts, forest edges, desert riparian, aspen groves, golf courses, and urban areas with scattered trees and open parks. They often nest in trees along rivers or lakes, and also in shelterbelts near agricultural areas. In open areas, eastern kingbirds nest in trees, such as hawthorn, apple, elm, mulberry, Osage orange, Norway spruce, cottonwood, aspen, oak, willow, maple, and honey locust. They will nest in trees such as American hornbeam, northern white-cedar, American sycamore, willow, or snags when nesting over water. They may also infrequently nest in big sagebrush shrubs and on human structures, like utility poles. Eastern kingbirds usually place their nests between 60-70% of the tree height, and nests may be exposed at the edge of the canopy or on a snag. They usually nest in trees or shrubs >2.2 yd/2 m above the ground. 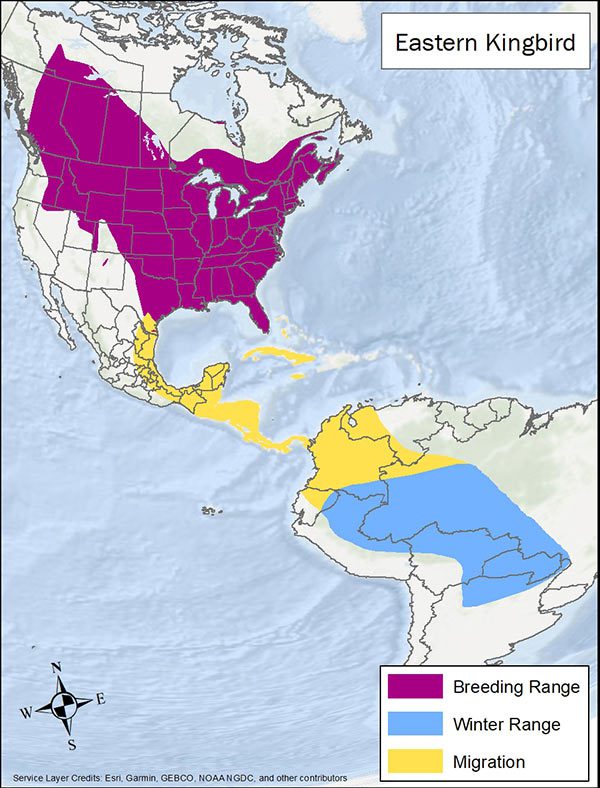 Maintain eastern kingbird breeding habitat by protecting open spaces, small orchards, and fencerows in the eastern portion of their breeding range, and  shelterbelts and riparian trees in the western portion of their range. Maintaining trees and other perches in agricultural landscapes will also provide nesting and foraging sites for eastern kingbirds.

Avoid practices that remove trees used for foraging and nesting. Avoid conversion of hayfields and pasture lands especially in the eastern portion of kingbird breeding range. Avoid pesticide exposure which could be harmful to adults and nestlings, and reduce insect food sources.

BirdLife International and Handbook of the Birds of the World. 2019. Bird species distribution maps of the world. Version 2019.1. Eastern Kingbird

The Cornell Lab of Ornithology, Birds of the World Eastern Kingbird

The Cornell Lab of Ornithology. All About Birds Eastern Kingbird