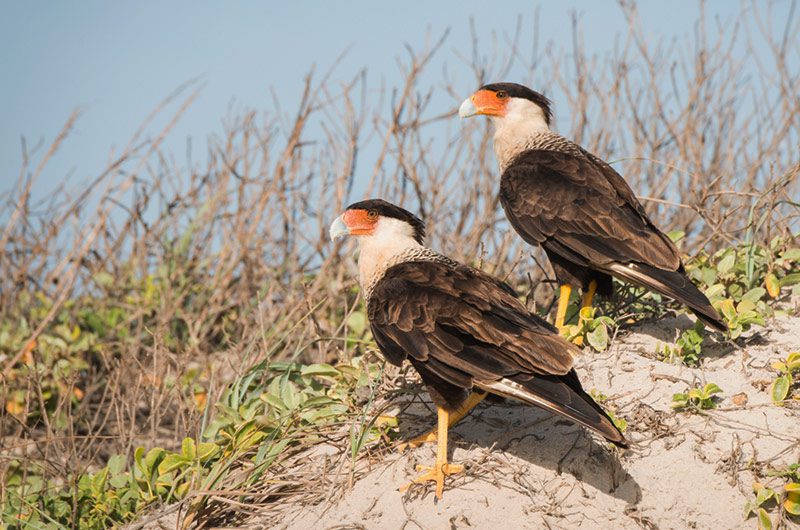 At times, two crested caracaras will pair up to take on larger prey, like rabbits. When a caracara feeds on roadkill, it is dominant over vultures, oftentimes scaring them away. They have flatter talons than most raptors allowing running on the ground more efficiently.

The crested caracara is a raptor that is 20-23 in/50-64 cm long and adults weigh 33.6 oz/953 g. The caracara has predominantly black to brown feathers on its underbelly, back, wings and crown with white feathers on its lower underbelly, head and neck. The caracara’s large bill has a light blue tip which abruptly changes to a dark yellow-orange closer to the base. Connecting the beak to the face is reddish-orange skin. When in flight, white feathers on the tip of its wings can be seen from below. The caracara has a long neck like other raptors, but unusually long legs. The crested caracara fittingly has a crest atop its head which remains flat unless threatened.

They are resident and nonmigratory birds found in Florida, as well as the southwestern United States, and Central America. Crested caracara is federally designated as a Threatened species in the United States.

Crested caracaras are active during the day. They typically nest on the highest available spot such as treetops or rock ledges. Adult birds do not travel more than 2 mi/3 km from their nests. The female caracara will lay 1-4 eggs annually. Both the male and female caracaras care for the young. Caracara offspring commonly remain in their parents’ territory for more than a year. When adults form a pair, they remain close to one another throughout the rest of their life, up to 30 years.

At times, two crested caracaras will pair up to take on larger prey, like rabbits. When a caracara feeds on roadkill, it is dominant over vultures, oftentimes scaring them away. They have flatter talons than most raptors allowing running on the ground more efficiently.

The crested caracara thrives in open arid country, semidesert, and coastal lowlands. Characteristics of preferred habitat include open grassland with scattered trees (<5%) and some shrubs (<20%). Caracaras inhabit native dry prairie with scattered wetlands as well as pasturelands. They feed on insects, snakes, turtles, squirrels, eggs, birds, rabbits, and frogs, and carrion including, roadkill. While caracara will consume dead livestock, they do not kill calves or lambs. 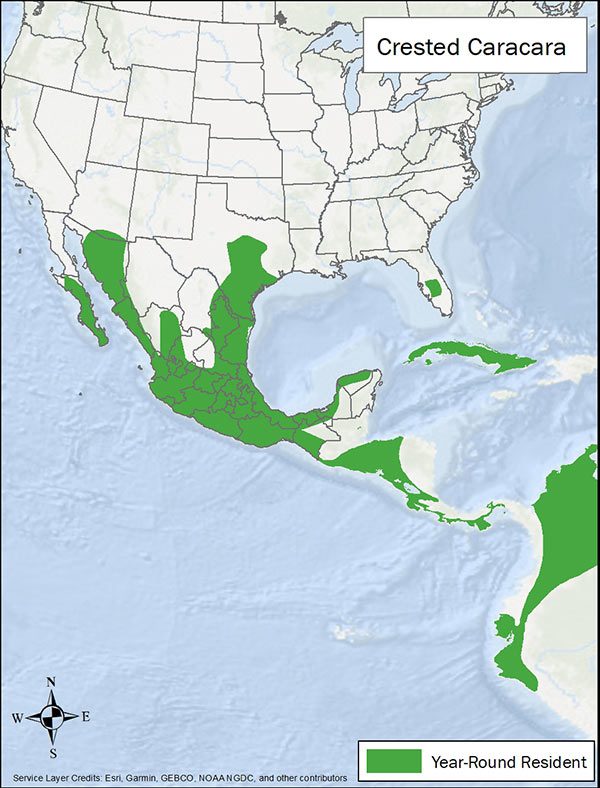 Land development creates habitat loss. The disappearance of prairie and pastureland is a major threat to caracara. This includes land conversion to residential or cropland. Avoid poisoning small mammals and other prey species that will potentially remain in the ecosystem and kill raptors including caracaras.

Bald eagles have similar habitat requirements and benefit from maintenance of open grasslands in the Southern United States. The prey species of caracaras also benefit from prairie maintenance.

BirdLife International and Handbook of the Birds of the World. 2019. Bird species distribution maps of the world. Version 2019.1. Crested Caracara