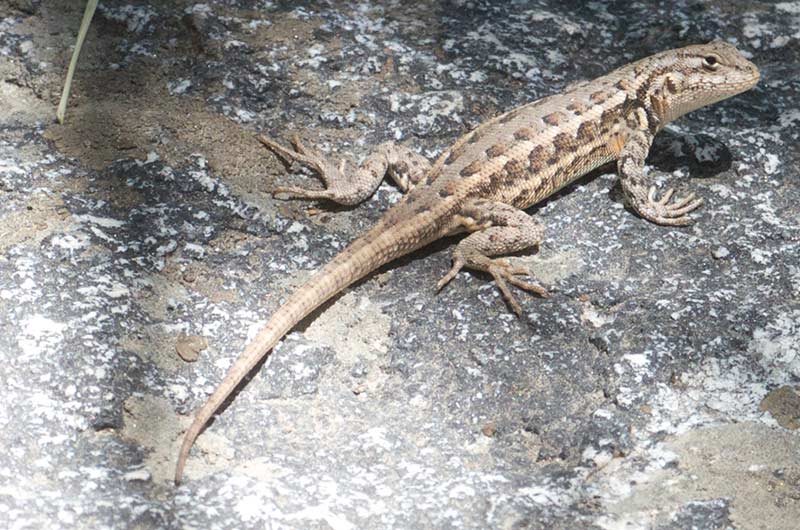 Common sagebrush lizards can drop their tails to escape predators. The tail can regenerate like the prairie lizard, but it is usually shorter and a slightly different color than the original tail.

Common sagebrush lizards have small, narrow light brown, olive, or gray bodies with a blueish or greenish hue on the top. They have a wide light gray stripe down the back with faint black and white markings. Pale stripes are found on both sides, bordered by darker gray or brown. They also have irregular dark markings that run down the back and on each shoulder. Female common sagebrush lizards have white, pale blue, or yellow coloring on the underside, whereas males have patchy blue coloration on the sides of the abdomen and blue mottling or streaking on the throat. Mature adults reach 4-6 in/10-15 cm in length with a tail length approximately 1.5 times the body length.

The common sagebrush lizard can be found in areas with sandy soil and large areas of open ground. They are most active on warm sunny days, typically from early April through October, where they can be seen near and under shrubs and other vegetation that provides shelter from predators and heat. They will retreat underground or under rocks and woody plants at night or on cool, wet days.

Common sagebrush lizards can drop their tails to escape predators. The tail can regenerate like the prairie lizard, but it is usually shorter and a slightly different color than the original tail.

Sagebrush lizards occupy arid regions of the Great Basin in the western United States. Contrary to the name, they occur in a variety of habitats, including deserts, open coniferous forests, mixed forests, grasslands, sand dunes, and shrublands. The common sagebrush lizard often resides in areas with abundant bare ground, mixed with small shrubs (often less than 10 in/25 cm) and grass cover less than 20%. Sites with extensive litter are generally avoided. Sagebrush lizards are known to perch on rocks and logs. They burrow in soil or use rodent burrows for shelter. 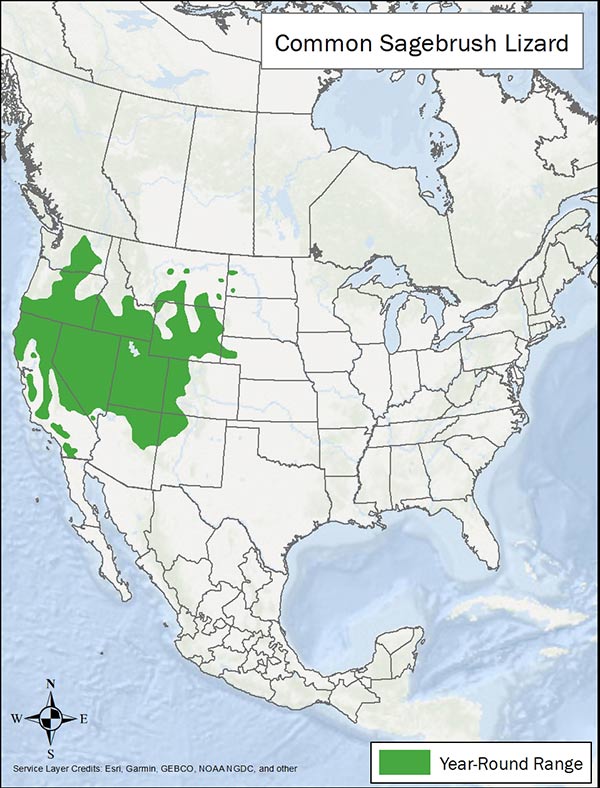 Avoid habitat conversion to agriculture or development.  The removal of sagebrush and other shrubs should be avoided. Avoid the introduction of invasive non-native species which can degrade the habitat. Avoid habitat fragmentation from roads and off-road vehicle use.