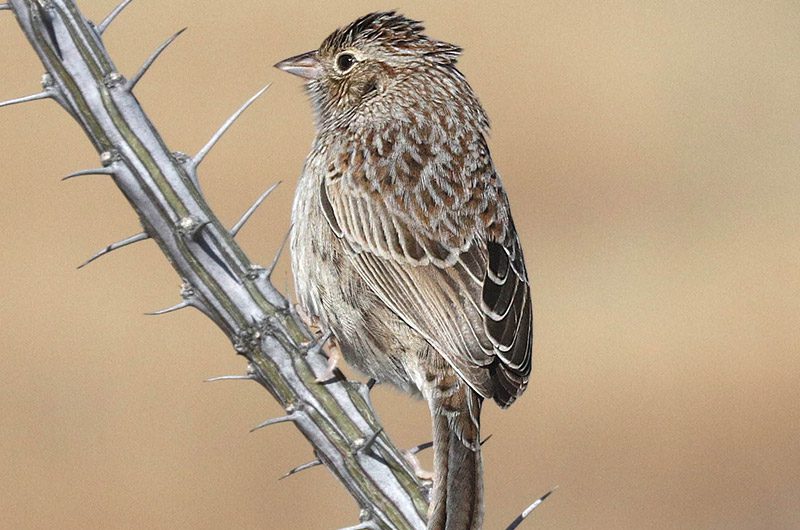 Cassin’s sparrow populations can fluctuate widely each year in both abundance and geographic extent, likely in response to summer precipitation. Within the center of their breeding range, they may be highly abundant or scarce, while individuals may suddenly appear at the edge of their breeding range where they do not usually occur. There are several hypotheses to explain these fluctuations, but little evidence to support any of them.

The Cassin’s sparrow is about 5-6 in/13-15 cm long with brown and gray streaking on the back, a pale gray throat and breast, a white belly, and a light gray face. The central tail feathers are brownish-gray with dark brown bands, and white corners on the tail can be seen when the bird is in flight.

Beginning in early spring, males will “skylark”: fly above their territory and glide down while singing. Their song starts with two short introductory notes, followed by a rich trill and two lower notes. Birds can also be seen hopping on the ground, eating insects and seeds. In the breeding season, you can find Cassin’s sparrows in the shortgrass prairie of the southern Great Plains, and in the winter, they occupy Chihuahuan grasslands in Arizona, New Mexico, Texas, and northern Mexico.

Cassin’s sparrow populations can fluctuate widely each year in both abundance and geographic extent, likely in response to summer precipitation. Within the center of their breeding range, they may be highly abundant or scarce, while individuals may suddenly appear at the edge of their breeding range where they do not usually occur. There are several hypotheses to explain these fluctuations, but little evidence to support any of them.

Cassin’s sparrows are found in the shortgrass prairie of the southern Great Plains in areas with scattered shrubs, such as cactus, yucca, mesquite, sand sagebrush, prickly pear, rabbitbrush, greasewood, and creosote bush. In some areas, they are found in fairly dense shrublands with scattered grassy openings; they will tolerate a wide range of shrub densities as long as some grass is also present, usually bunchgrasses.

The nest is set on or near the ground (<8 in/20 cm above the ground) in a shrub or clump of grass. Their territories typically contain 20–35% bare ground, 40–80% grass and forb cover, and >5% shrub cover. Habitat used during the winter in the southwestern U.S. and northern Mexico is similar to the breeding season habitat. Cassin’s sparrows need some tall vegetation for nesting and as song perches and provide habitat for their insect prey. 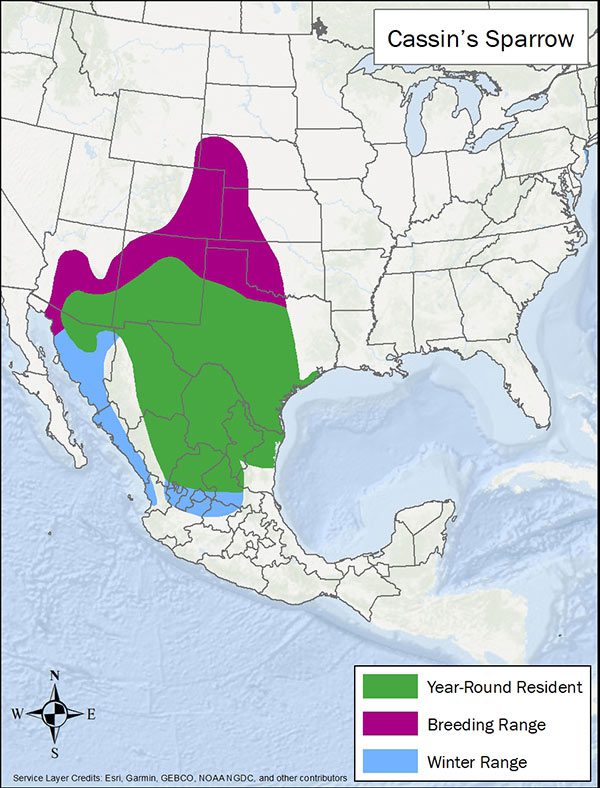 Maintain or restore grasslands with native grass cover, including land enrolled in the U.S. Conservation Reserve Program. Periodic fire or brush control can maintain open grasslands and prevent overgrowth of dense woody vegetation. Delay mowing until early-August to allow the birds to complete their nesting cycle and use a flush bar or similar device if you must mow before mid-August.

Avoid heavy or continuous grazing, which can remove too much cover for nesting, especially where grass cover is already short and sparse. Avoid disturbance of nesting birds, as the adults are easily disturbed at the nest, and visits by humans may result in nest failure.

Other species that may benefit from habitat management for Cassin’s sparrows include lesser prairie-chickens, scaled quail, lark buntings, and western meadowlarks.

BirdLife International and Handbook of the Birds of the World. 2019. Bird species distribution maps of the world. Version 2019.1 Cassin’s Sparrow

The Cornell Lab of Ornithology, Birds of the World Cassin’s Sparrow

The Cornell Lab of Ornithology. All About Birds Cassin’s Sparrow