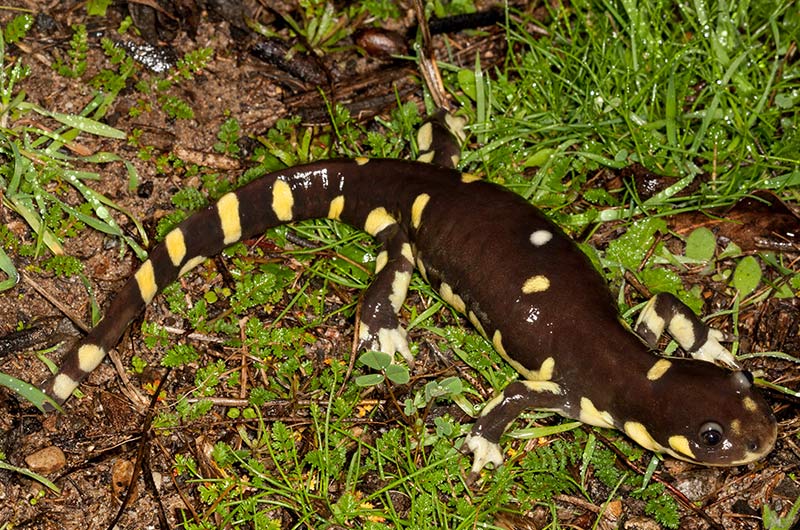 California tiger salamander was historically found across the Central Valley. Recently it was found on San Francisco Peninsula. While it is still found in Sonoma County, this population is geographically separated from the closest populations to the south by 45 mi/72 km.

The California tiger salamander is listed as Threatened by the United States across its range, except it is considered Endangered in Sonoma and Santa Barbara Counties in California.

California tiger salamander is restricted to the central part of California. It is locally common in some areas.  Breeding happens after rains fill pools and ponds, usually December-February, and most individuals move less than 0.6 mi/1 km from their breeding pond. Migration to breeding ponds typically occurs following rainstorms or on rainy nights. Larvae transform in late spring or summer as water recedes. Some larvae may remain in permanent ponds.  California tiger salamanders may not breed in drought years when ponds fail to fill.

California tiger salamander was historically found across the Central Valley. Recently it was found on San Francisco Peninsula. While it is still found in Sonoma County, this population is geographically separated from the closest populations to the south by 45 mi/72 km.

The natural breeding habitat for California tiger salamanders is vernal pools. Many pools have been degraded and lost through agricultural conversion. Reproduction is most successful in fishless bodies of water. Ponds that dry completely for at least 30 days prevent bullfrogs and non-native fish from becoming established. California tiger salamanders use vacant or occupied mammal burrows of California ground squirrel or valley pocket gopher in many types of upland habitat, including annual grasslands and open foothill woodlands. Soil texture for burrows should be silty clay loam, sandy clay loam, or loam.  Adults mostly eat insects, while larvae eat algae, zooplankton, aquatic insects, tadpoles, and smaller salamander larvae. They are known to travel approximately 1.2mi/2 km between upland habitat and breeding ponds, however most travel less than 700 ft/200 m. 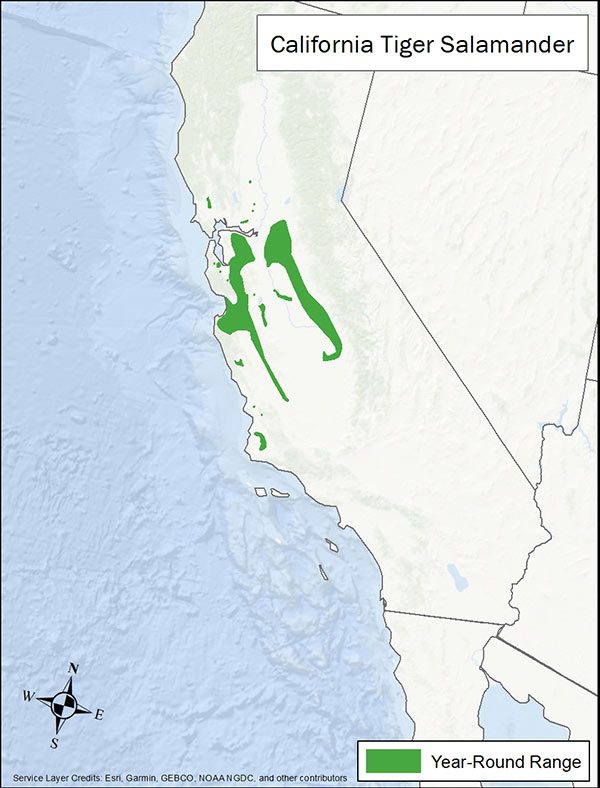 Maintain vernal pools, wetlands, ponds, and surrounding rangelands that are habitat for California tiger salamander. Maintain or improve water quality in breeding ponds by reducing road runoff and pesticides in and around breeding areas. Where habitat is degraded, restoration actions should be taken. Following severe wildfires, work with local and state agencies to reduce erosion and mudslides into and around breeding areas.