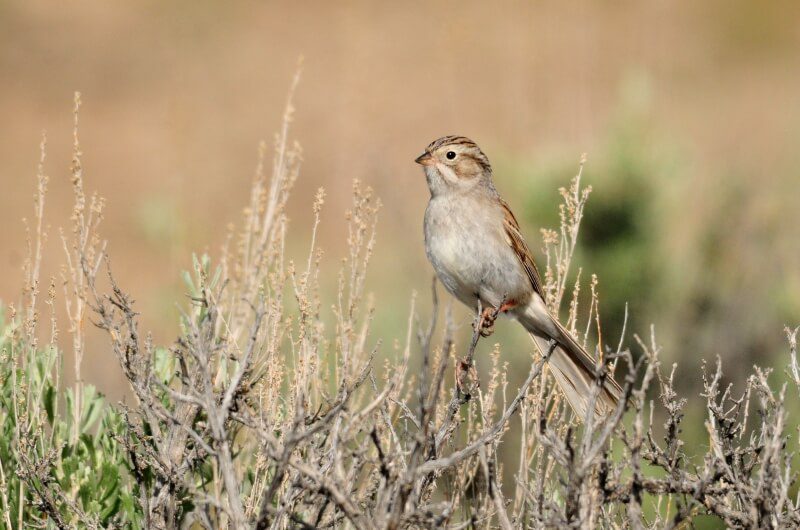 Brewer’s sparrows are highly adapted to dry environments year-round and can go weeks without drinking water.

Brewer’s sparrows are smaller than a robin, 5-6 in/13-15 cm, and a rather drab-looking songbird with an unmarked gray breast and belly, gray eyebrow, brown streaky back, and relatively long, notched tail. Males and females look similar throughout the year. In their breeding range in sagebrush shrublands of western North America, they are usually the most common songbird.

In the spring and summer, males can often be seen and heard singing their buzzy trills from the tops of sagebrush shrubs. In the winter, Brewer’s sparrows are often found feeding on seeds in mixed-species flocks. They arrive on their breeding grounds in western US and parts of southern Canada in March and April, and migrate south starting in early fall to spend winters in the desert shrublands of Mexico and the southwest U.S.

Brewer’s sparrows are highly adapted to dry environments year-round and can go weeks without drinking water.

Brewer’s sparrows live in shrublands year-round. In the spring and summer, they are most often found in sagebrush shrublands where shrubs are generally <5 ft/1.5 m tall. They may also occur in openings in pinyon-juniper woodlands or in other mountain shrub communities. They typically nest in taller, denser shrubs with less bare ground compared to surrounding patches, and the nest is usually placed low, <3 ft/1 m above ground, in a sagebrush shrub. They mostly feed on small insects in larger, more vigorous sagebrush shrubs. In the winter, Brewer’s sparrows can be found in sagebrush shrublands, but are more likely to be desert shrublands dominated by saltbush shrubs and creosote. They also feed on insects in shrubs in the winter, but more commonly on seeds gleaned from plants. 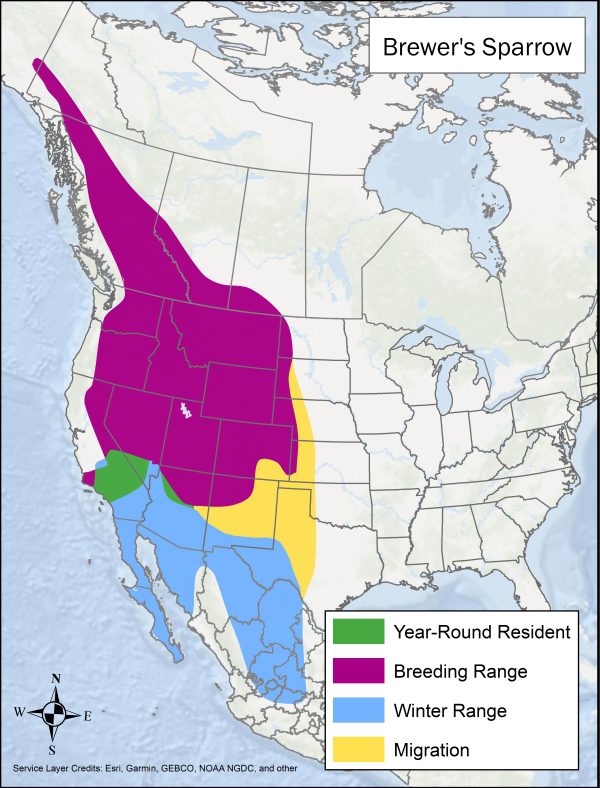 Avoid shrub treatments (e.g., mechanical thinning) in the late spring and early summer to reduce nest disturbance for breeding Brewer’s sparrows. Chemicals used for large-scale insect or weed control could have negative impacts on Brewer’s sparrow. Avoid chemical treatments for cheatgrass until after July. Any activity that reduces sagebrush cover has the potential to negatively impact the species.  Avoid the use of prescribed fire in shrub and sagebrush habitat, which can reduce Brewer’s sparrow densities.

Other sagebrush-obligate species will likely benefit from habitat management for Brewer’s sparrows, such as sage thrashers, sagebrush sparrows, greater sage-grouse, and pygmy rabbits.

BirdLife International and Handbook of the Birds of the World. 2019. Bird species distribution maps of the world.  Version 2019.1. Brewer’s Sparrow

The Cornell Lab of Ornithology, Birds of the World (Brewer’s Sparrow)

The Cornell Lab of Ornithology, All About Birds (Brewer’s Sparrow)