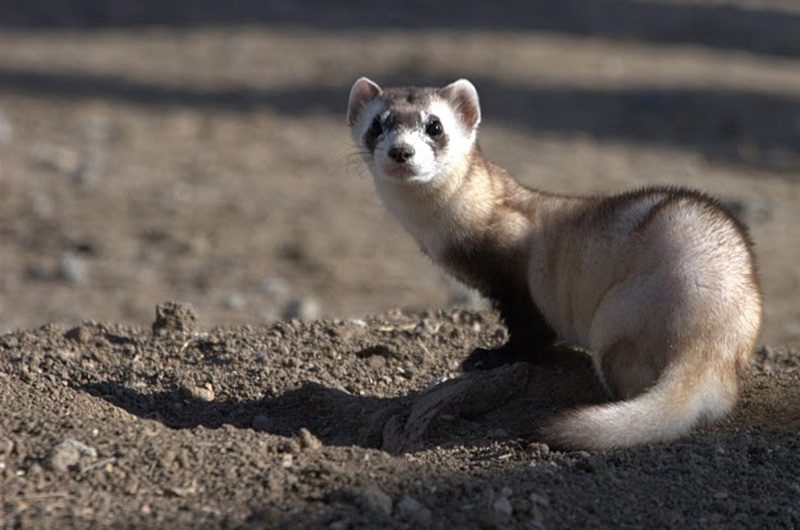 The black-footed ferret is the only ferret native to the Americas. They were once considered extinct in the wild until a small isolated population was discovered in Wyoming in 1981. In 1987, the last 18 wild ferrets were captured to establish a captive breeding program. Five hundred black-footed ferrets are now estimated to be alive in the wild, after reaching around 1,000 individuals at the end of the 2000s.

The black-footed ferret is a medium-sized mustelid, a member of the weasel family. Adult ferrets are similar in size to mink and weigh between 1.4-2.5 lbs/0.6-1.1 kg. They have black feet, a black-tipped tail, and a black face mask. The rest of their fur is a buff-beige color, which lightens to a nearly white color around their forehead, muzzle, and throat.

Black-footed ferrets once lived throughout the Great Plains wherever prairie dog colonies (black-tailed, white-tailed, and Gunnison’s prairie dogs) were found. Today they are considered Extinct in Canada and Endangered in the United States. A captive breeding program has enabled reintroduction efforts across the western United States, southern Canada, and northern Mexico.

Black-footed ferrets are solitary and spend most of their time underground in prairie dogs burrows, searching for food, raising their young, sleeping, and sheltering from predators. Mating season is March and April, with litters typically producing 3 to 5 kits born in May and June. When kits are about two months old, mothers move their litter from burrow to burrow and begin teaching their kits how to hunt prairie dogs.

Ferrets are nocturnal and may be seen while spotlighting if a ferret is traveling above ground between prairie dog burrows. They have an unmistakable emerald green eyeshine.

The black-footed ferret is the only ferret native to the Americas. They were once considered extinct in the wild until a small isolated population was discovered in Wyoming in 1981. In 1987, the last 18 wild ferrets were captured to establish a captive breeding program. Five hundred black-footed ferrets are now estimated to be alive in the wild, after reaching around 1,000 individuals at the end of the 2000s.

If prairie dog colonies are too small or the distance between colonies is too large, black-footed ferrets cannot sustain their populations. Shallow, well-drained, silty clay loam, sandy clay loam, or loam soils with a slope <15% are ideal for prairie dog burrow construction and, therefore, also ideal for ferrets. 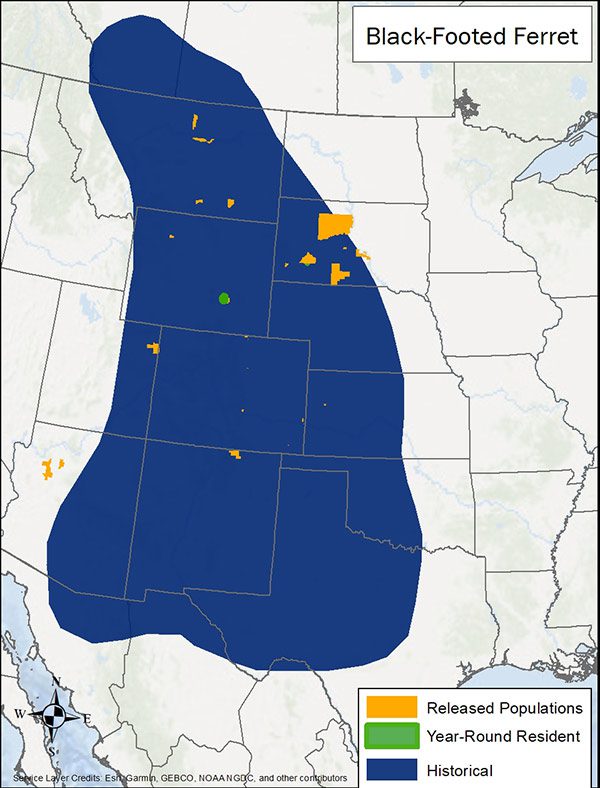 To benefit the black-footed ferret, avoid disturbance to open grasslands and prairies, where this species occurs. Ferrets are very susceptible to nonnative diseases such as sylvatic plague and canine distemper. Captively bred individuals are vaccinated against canine distemper; however, wild-born young are at risk of contracting the disease.

If ferrets are on or near your property, consider working with state wildlife agencies to vaccinate prairie dogs against plague to ensure ferrets have a reliable food source. As the captive breeding program successfully raises young black-footed ferrets, additional reintroduction sites are needed. If you have large areas with contiguous prairie dog colonies, consider allowing reintroduction on your property.

Avoid eradicating or reducing prairie dog populations if black-footed ferrets are nearby, as these colonies are necessary for the survival of the ferret.

Other species that may benefit from habitat management for black-footed ferrets are other species dependent on prairie dog colonies and complexes including burrowing owls, rattlesnakes, and mountain plover.