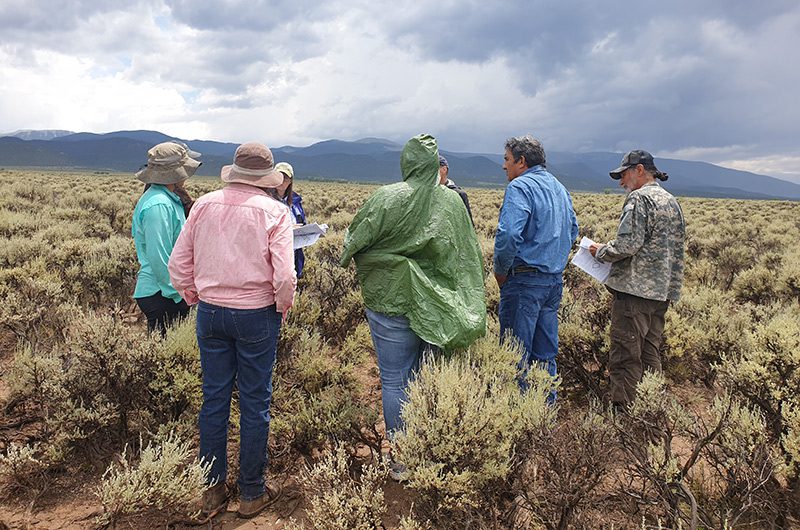 The two-part workshop “LandPKS: A Tool for Producers” took place on July 23rd, 2021 in San Luis, Colorado, and on the surrounding lands. Organized by collaborating partners from Colorado Open Lands, USDA-ARS, NRCS, and Colorado State University, the purpose of the workshop was to introduce land managers in the San Luis valley to using LandPKS to access data and information to help support management decisions.

The first part took place under a tent in the courtyard of a community center in San Luis, and consisted of a conversation about land management challenges in the San Luis valley and an introduction to using LandPKS. Settled under the tent holding cups of coffee, we began with introductions and a casual conversation about priorities and challenges in the valley. When it came to land management challenges in the area, the answer was nearly unanimous: water. Many of the workshop participants had been struggling with drought since 2002. “Runoff is happening earlier and earlier each year. There’s too much water too early and not enough when we need it,” one participant, a rancher, said.

The local wildlife has changed its patterns due to lack of water, another participant added. He had observed a reduction of wildlife and beneficial insects. “Creeks are drying out and riparian areas are suffering,” he said. “There is also very little topsoil and soil organic matter here,” another participant chimed in. Lack of topsoil and soil organic matter can slow down the time it takes for water to infiltrate the soil, and the conversation shifted to manure and ways to make the most of the available water. We concluded the discussion in agreement about the importance of ditch maintenance. 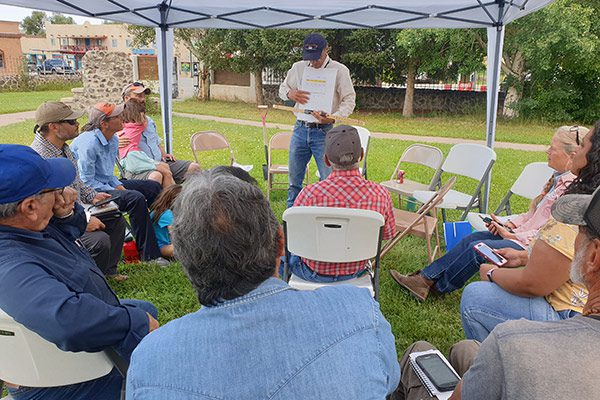 “You don’t have to send your soil to a lab to learn what it is and observe if it’s getting better,” said Jeff Herrick, LandPKS Global Lead. He provided an overview of the varied possible uses of LandPKS: “It’s important to know about your soil for everything from septic design, to rangeland management, to finding good soils for adobe brick fabrication.” The San Luis valley has very diverse soils, which makes it all the more important for land managers there to know what soils they have on their land. This knowledge enables them to identify the most productive soils on their land so that, for example, increasingly limited irrigation resources can be allocated.

We walked through how to get set up on LandPKS and create a site. After a brief introduction to the LandPKS modules and functions, including the LandInfo, Vegetation, and Habitat modules, one participant, who was learning on another person’s device, said, “maybe I’ll finally get a smartphone now!”

Part two of the workshop was a field demonstration of how to use LandPKS to learn about the soil at a specific site, which took place on a local rancher’s land. Undeterred by the rain, we sampled soil from a two-foot hole which we had pre-dug with the landowner. Rolling the soil into balls and pressing it into ribbons, we observed the high clay content of the soil. In addition, we used LandPKS to access local ecological site information at that specific spot. 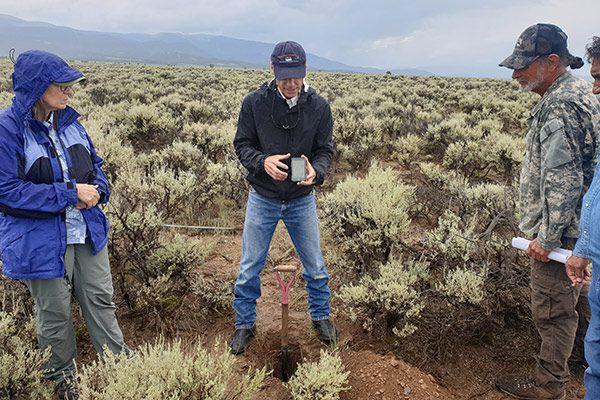 During the closing reflections in the field, several participants said that what they had learned at the workshop was useful and expressed interest in a follow-up workshop later this year. Particular interest in the Vegetation and Habitat modules was expressed. When asked what the most important thing they had learned at the training was, one participant said that he learned how to use LandPKS to determine how to best use his land while also enhancing its ecology. Another participant said, simply, “That this tool exists!”